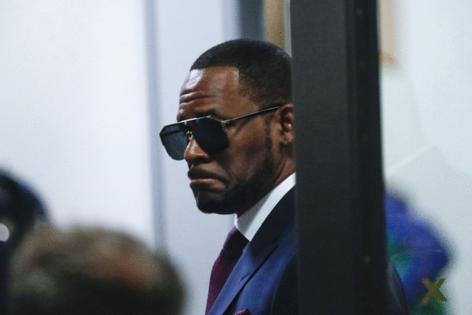 CHICAGO — R&B singer R. Kelly was on suicide watch following his conviction on racketeering charges in New York, his lawyer told a federal judge in Chicago on Wednesday.

In the first court hearing since a jury found Kelly guilty three weeks ago, attorney Steve Greenberg said the U.S. Bureau of Prisons placed the singer on suicide watch for some time but that has since been lifted.

Placing a recently convicted prisoner under increased monitoring is common in the federal prison system and Greenberg did not say that Kelly had expressed any actual desire to harm himself.

Greenberg also said Kelly has told him he’s in the process of revamping his legal team in the New York case — which which underwent a dramatic shake-up in the weeks leading up to trial — but that Greenberg and his partner Michael Leonard believe they will stay on as lead counsel in Kelly’s Chicago cases.

Leinenweber set an Aug. 1 jury trial for Kelly and his two co-defendants, longtime associates Derrel McDavid and Milton “June” Brown. The trial at the Dirksen U.S. Courthouse is expected to last three or four weeks.

Kelly, who participated in the conference by video from the federal jail in Brooklyn, did not speak during the hearing because no one could figure out how to unmute him.

Kelly, 54, was convicted on Sept. 27 of racketeering conspiracy charges alleging he used his music career to further a criminal enterprise. The jury found him guilty of 12 individual illegal acts, including sex with multiple underage girls as well as a 1994 scheme to bribe an Illinois public aid official to get a phony ID for 15-year-old singer Aaliyah so the two could get illegally married.

He faces anywhere from 10 years to life in prison when he’s sentenced on May 4, according to the U.S. attorney’s office in Brooklyn.

Kelly’s attorneys have said it makes little sense to rush to trial in Chicago without knowing what Kelly’s sentence will be in New York.