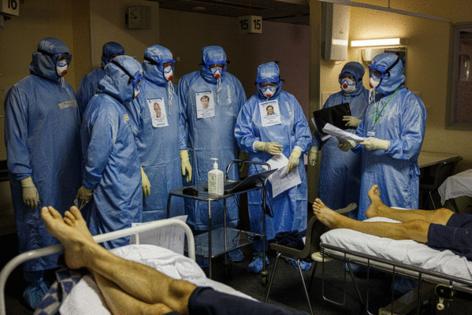 President Vladimir Putin ordered Russia’s most sweeping COVID-19 restrictions since May as the numbers of new infections and deaths during the pandemic reached record levels.

Putin approved a government proposal to declare Oct. 30 to Nov. 7 as “non-working days” in an effort to slow the spread of the virus in a televised meeting with officials Wednesday. The country’s worst-affected regions will be required to introduce the stay-at-home order from Oct. 23.

“Now it is especially important to bring down the peak of a new wave of the epidemic,” said Putin, who issued an unusually impassioned plea for Russians to protect themselves by getting vaccinated.

He expressed dismay at low levels of vaccination among Russians despite the “difficult” COVID-19 situation. “I don’t understand what’s happening,” Putin said. “We have a reliable, safe vaccine.”

New daily infections have surpassed 30,000 in the past week for the first time since the crisis erupted last year, with deaths reaching a record high of 1,028 on Wednesday. While the government targeted an immunity rate of 80% in the fall, the actual level of the population who’ve either vaccinated or recovered from the virus is just over 45%, Deputy Prime Minister Tatyana Golikova told Putin.

The government proposed providing new loans and subsidies to small businesses hit by the restrictions. The president empowered regions to expand the number of non-working days, in which people will continue to receive their salaries, before or after the nationwide period.

The measures are not as strict as a lockdown, which the Kremlin has resisted in order to avoid the economic fallout, instead placing responsibility on regional officials to announce social restrictions to try to curb the spread of the virus.