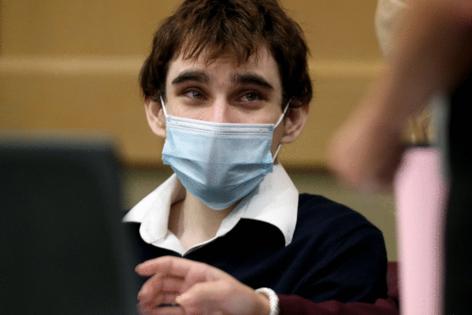 FORT LAUDERDALE, Fla. — Elizabeth Stout was a victim of the mass shooting at Marjory Stoneman Douglas High School, but you won’t hear her name called out on Wednesday when the confessed gunman pleads guilty for his crimes.

There are dozens more like her. The shots from Nikolas Cruz’s AR-15-style rifle rang in their ears. They cowered in genuine fear for their lives. They stepped over and past the lifeless bodies of their friends, their classmates, their teachers. But because their skin was never pierced by a bullet, they will never see Cruz punished for what he did to them.

And they will never get a say in his fate.

Now 21 and a senior at the University of Florida, Stout, who suffers from post traumatic stress disorder, is among dozens of plaintiffs who have filed lawsuits against the school district and others for failing to prevent the tragedy. Civil suits are the only means by which the unwounded victims of Parkland have standing, where they can be recognized as people who genuinely suffered from the actions of Cruz.

Cruz is scheduled to walk into a courtroom Wednesday morning and plead guilty 34 times — half to account for the people he murdered on Feb. 14, 2018, the other half for the people who survived the physical wounds he inflicted.

Stout and other unwounded survivors count themselves among the victims of the mass shooting, even if they are an afterthought omitted from the list of casualties. “He took so many things from me,” she said. “It changed everything I am as a person. I saw death. It’s the worst thing that could ever happen to a family.”

Jay Cohen, Stout’s lawyer, represents a dozen such victims. One was the last person to find refuge in the third-floor classroom of geography teacher Scott Beigel. Had Beigel shut the door a few seconds later, he might have lived, and Cohen’s client (who declined to be named or interviewed) would not.

“She had to give them her splattered clothes as evidence,” Cohen said.

By pleading guilty, Cruz jumps ahead in the legal process to the second phase of his trial, the one in which a jury determines whether he deserves to be executed as punishment for the murders. Jurors will hear the opinions of the dead victims’ families during that phase.

Jurors won’t hear the opinions of the those who weren’t physically wounded. If they had a say in Cruz’s punishment, they would likely be divided, Cohen said. Some would favor a life sentence, others the death penalty. “It would be the same or similar split of opinions as we have existing in our country,” he said.