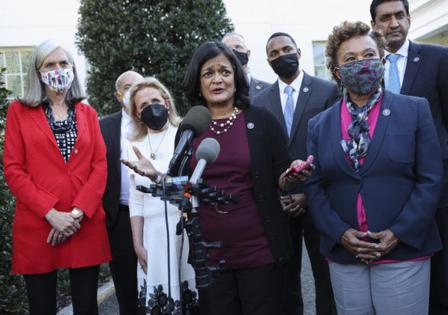 WASHINGTON — Senate Majority Leader Chuck Schumer said Tuesday that congressional Democrats aim to seal a deal this week on Joe Biden’s economic agenda, as feuding liberals and moderates meet with the president at the White House.

“The pace has picked up,” Schumer said after a closed-door lunch with other Senate Democrats. “The desire to get this done is universal.”

He said congressional leaders are pushing for a “framework” by the end of the week on a package of tax increases and programs to fight climate change and expand federal support for education, childcare and health care. That would clear the way to advance that plan as well as the Senate-passed $550 billion public works bill awaiting action in the House.

Then at 4:30 p.m., Biden, Harris and Yellen were to meet with eight centrist Democrats, including Sens. Jon Tester of Montana and Mark Warner of Virginia.

The goal is for the factions to settle on a list of policies to include in the legislation that can appeal to the broadest swath of the party — including two key moderate holdouts, Sens. Joe Manchin and Kyrsten Sinema, and progressives such as Sen. Bernie Sanders.

After the first meeting, Jayapal said that Biden had discussed a climate and social-spending bill in the range of $1.9 trillion to $2.2 trillion. Progressives gave him a list of five major priorities for the bill, she said, without elaborating.

Biden has been talking individually with Manchin and Sinema, who are pressing him to significantly pare down the social-spending legislation. He met separately Tuesday with both senators, White House Press Secretary Jen Psaki said. Manchin and Sanders met Monday evening at the Capitol after an op-ed Sanders published Oct. 15 in the Charleston Gazette drew a fiery rebuke from the West Virginia senator.

“He just said he’s working very hard with them and he feels like he’s going to try to get us to resolution,” Jayapal said. “And went through some of the things he knows are important to us in terms of what he’s fighting for in the bill.”