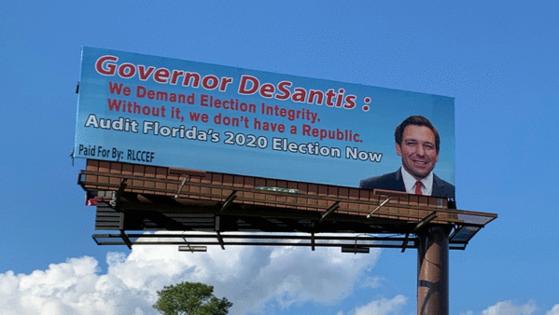 LAND O’LAKES, Fla. — Debbie Horgan, 64, approached the beige house and rapped her knuckles against the door.

A few minutes later, she returned to an SUV idling in the street.

“Another no answer,” she said to the driver, 61-year-old Kevin May. “I’m willing to bet not everyone lives here.”

A recent Saturday morning found Horgan, May and 77-year-old Paul Jordan on a mission. They drove around Pasco County seeking to ferret out voter fraud that local and state election officials have affirmed doesn’t exist. Each knock presented an opportunity to find someone whose address didn’t match their voter registration — and cast doubt on Florida’s election systems.

“I’m doing this because I want to give America a chance,” Jordan told a reporter.

Across Florida, former President Donald Trump’s most ardent supporters are scouring communities for evidence of voter fraud. They are bombarding local elections offices with calls and emails. They are showing up wherever lawmakers are meeting, demanding an audit of last November’s presidential contest that installed Democrat Joe Biden in the White House.

In Tallahassee, they emblazoned their demand on a billboard.

The push for a recount began months ago in states like Arizona, where Trump lost by a narrow margin. (A much-maligned review of ballots in that state’s largest county, led by a Trump supporter, confirmed Biden’s victory.) But the movement is now bleeding into states Trump won comfortably, including Florida.

This month, the Lake County Republican Party passed a resolution demanding Florida audit its election results. A state lawmaker from the same county filed a bill that would do just that.