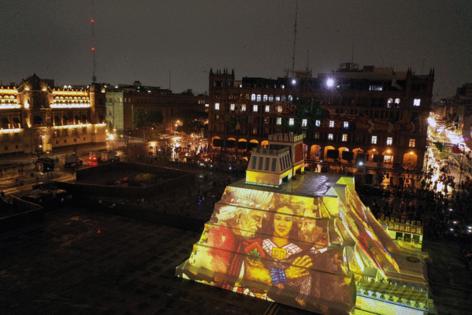 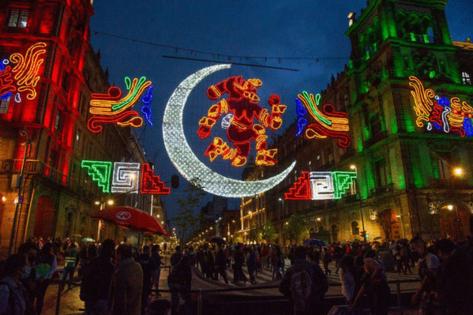 MEXICO CITY — A replica of the Great Temple of the Aztecs, about a third of the size of the original, rose from the floor of the central square of Mexico's capital this summer like a gargantuan child's toy, more than 50 feet high, a gleaming form smack in front of the baroque National Palace. At night, the pyramid's slanting white walls became a video-mapping screen that told a dramatic animated story of the rise and fall of the Mexica, or Aztec Empire — an event that took place 500 years ago, right on this spot in a city on a lake that was once called Tenochtitlan.

Throngs of locals and tourists showed up to watch the 15-minute history show. Vendors walked among the crowds selling Aztec-style souvenir headdresses with colored lights, filling the Zócalo with flashes of revelry.

"It's marvelous. Every kid should get a chance to see it," said Elizabeth Fuerte, a museum docent who watched one night while wearing one of the low-tech headdresses. "We've always had this 'bronze' history that the government has imposed upon us, and I think we're ready for this change."

It was a weird scenario in a country accustomed to contradictions. Mexico is at once rich and poor, tolerant and conservative, low-brow and refined. It is proud of its pre-Hispanic millenary history, yet still unable to reconcile with it.

Since taking office in late 2018, López Obrador's government and its supporters have made strategic attempts to exalt the country's Indigenous roots in official events and cultural projects. They've taken down a statue of Christopher Columbus and are in the process of replacing it with a replica of a pre-Columbian statue believed to depict a Huastecan woman. They've renamed landmarks, including a monument known for generations as the Sad Night (for Cortés' forces when they lost a key battle to the Mexica), now called the Victorious Night.

A key Mexico City thoroughfare, Puente de Alvarado, named for the conquistador known for leading the most horrifying massacres of captured Aztecs, is now México-Tenochtitlan, the formal name of the original city. And they've reshuffled resources to support more Mexican Indigenous artists, textile makers and artisans.

The government has also sought apologies from the Vatican and Spain for atrocities going back five centuries. First lady Beatriz Gutiérrez Müller, who is chairing a new commission on historical memory in Mexico, calls it a process of "decolonization."

It's a process that's infuriated several historians, academics and columnists for local dailies and conservative news journals, including Letras Libres, where writers routinely accuse AMLO of attempting a total rewrite of Mexican history.

Eduardo Matos Moctezuma, the highly respected de facto dean of Mexican archaeology, told the financial daily El Economista in August that "these things are not the way to consolidate our origin."