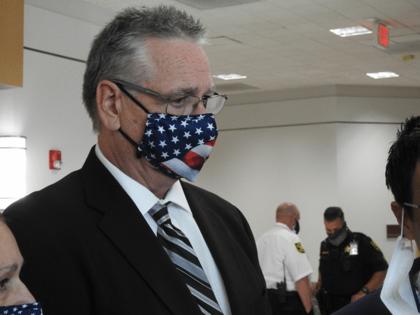 FORT LAUDERDALE, Fla. — In his first interview since he was criminally charged in the 2018 shooting at Marjory Stoneman Douglas High, the vilified deputy who took cover while a gunman shot students and staff is doubling down on his defense: In the chaos of the scene, he said, he did not know whether the shooting was coming to or from the 1200 building at the school.

The distinction is key to Scot Peterson’s explanation for why he did not run into the building to stop the killer. His defense will focus on his assertions that he couldn’t confront the gunman because he didn’t know where he was, or whether he was firing at the building or from within it.

It is a defense that will surely face challenges, as Peterson repeatedly referenced the 1200 building in his radio transmissions the day a shooter stalked its halls, killing 17 and wounding 17 more.

Peterson, 58, is charged with 10 counts of child neglect with bodily harm for staying outside the building instead of finding and stopping Nikolas Cruz. Other than Cruz, who this week signaled his intention to plead guilty to all charges, Peterson is the only person facing criminal charges in the shooting.

Peterson and his attorney are now pointing to sworn testimony from someone whose support he was not expecting — former Broward Sheriff Scott Israel.

It was Israel, sheriff at the time, who helped shape the narrative of Peterson as a coward who failed in his duty. In a sworn statement on Aug. 4, Israel agreed with Peterson’s view that it was reasonable for him to not know where the shots were coming from.

“I don’t think at any point he should have known precisely, unless he sees the killer, where the killer is firing from,” Israel said in excerpts of his deposition, released by Peterson’s attorney. In that deposition, Israel also said Peterson’s actions were consistent with the belief there was a sniper in the area targeting the building.

But did that justify Peterson’s decision not to run toward the danger to save lives? No, Israel told the South Florida Sun Sentinel this week. In that interview, Israel said Peterson exercised poor judgment and should have figured out where the shooter was as the events unfolded. “I believe as then-sheriff, that former Deputy Peterson should absolutely have gone into the 1200 building,” he said. “It wasn’t a training issue or a policy issue. It was an issue of courage. I’ve never wavered from that position.”

Peterson’s defense released excerpts from Israel’s sworn deposition, hoping to highlight the difference between hindsight and what Peterson knew as the shooting was taking place.

Peterson said Israel’s concession is pivotal because it supports his mindset at the time of the shooting. “I did the best I could with the information I had,” Peterson said, “hearing what I heard and assessing what I heard, not micromanaging every move after the fact. It’s easy to Monday-morning quarterback.”