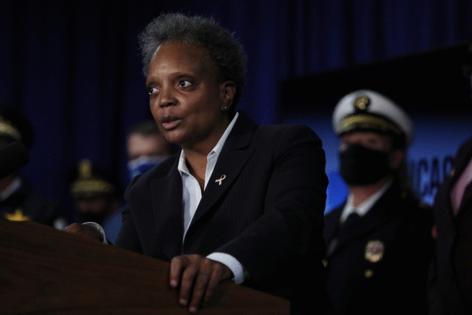 CHICAGO — Hours after Chicago Mayor Lori Lightfoot said she’s gone to court against the local Fraternal Order of Police over its refusal to comply the city’s vaccine mandate, the police union announced its own legal filing.

Lightfoot is asking the courts to intervene after the union chief told members to disobey Friday’s deadline to report their vaccine status. The FOP announced on Twitter it had filed its own request for a judge to hear the case, in the form of a lawsuit against the city, mayor and police Superintendent David Brown.

“As Chicago’s Mayor, I cannot and will not stand idly by while the rhetoric of conspiracy theorists threatens the health and safety of Chicago’s residents and first responders,” Lightfoot said in a statement issued Friday morning. FOP Lodge 7 President John Catanzara “has time and again deliberately misled our police officers by lying about the requirements of the policy and falsely claiming that there will be no repercussions if officers are insubordinate and refuse to follow a City and Department directive or order.”

The mayor’s statement alleges Catanzara is “engaging in, supporting, and encouraging a work stoppage or strike.” State law and the FOP contract both prohibit striking by Chicago police, Lightfoot said.

The duel filings were indicative of a growing standoff between the city and the police union over the vaccine mandate, which has escalated in recent days even after Lightfoot agreed to give employees the option of submitting to COVID-19 testing for the rest of the year if they’re not yet fully vaccinated.

At an unrelated news conference, Lightfoot stepped up her criticism of the FOP president, saying he’s trying to “foment an illegal work stoppage” and spur an “insurrection.”

Lightfoot also took aim at Catanzara’s checkered disciplinary history, noting that he is currently facing the possibility of being fired by the Chicago Police Board. She repeatedly urged officers not to follow in his footsteps.

“I don’t want him to lead these young officers astray and have them destroy their careers like he’s destroyed his,” Lightfoot said.

The mayor also linked the ongoing standoff to bigger issues facing the Chicago Police Department, saying the city can’t let Catanzara dictate how the department runs and arguing that the police department’s legitimacy is being put at risk by the FOP.