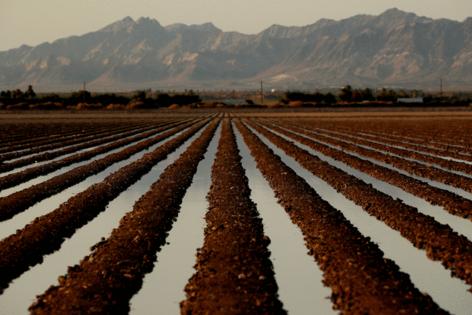 In the small city of Oakley, Utah, the drought conditions parching much of the West have depleted the natural springs that supply water to the community. During each of the past several summers, local leaders worried that quenching any major fire might empty the city’s water tanks.

The city issued water-use restrictions this past April and residents cut back, but officials heard a consistent message from their constituents, said Mayor Wade Woolstenhulme.

“If you guys are so low on water, why do you keep giving out building permits?”

In May, Oakley’s city council voted to pause new development and to prohibit any new landscaping needing irrigation, including private lawns. The 180-day ban was a drastic measure that city leaders were reluctant to take. Woolstenhulme said they had no choice.

“We can only allow [development] that we can provide water for,” he said. “We need to protect the people who live here before we let more people come in.”

A rainy autumn has helped replenish Oakley’s water, and the city plans to drill a new well later this year. That should allow the city to double its water capacity and rescind the building moratorium. But even as Oakley’s fortunes improve, communities throughout the West are facing difficult questions about water scarcity and what it means for future growth — especially because climate change is expected to make such droughts more frequent and intense.

The nation’s five fastest-growing states are all in the Southwest or Mountain West, regions of the country that already face severe drought.

“Our growth has been one of our greatest economic benefits as a state, and it's one of our biggest challenges going into the future,” said Candice Hasenyager, director of the Utah Division of Water Resources. “There's been this assumption that water will always be there, and we can grow however we want, but if we don't get water-wise, it could limit our ability to grow in the future.”

While many communities have begun drilling wells or building piping projects to bolster their supply, Hasenyager said there also has to be a reduction in demand.

WASHINGTON — Last weekend, before his second trip abroad since taking office, President Joe Biden had to prepare for foreign leader meetings and wanted to do it from the comfort of his family home. But he had problems ...Read More

Facebook Inc. has told employees to preserve company documents as the social media giant disclosed it’s coming under scrutiny over allegations that it misled investors and consumers about harms and declining users on its...Read More

The combined net worth of Elon Musk and Jeff Bezos approached $500 billion on Wednesday, fueled by the unrelenting rally in Tesla Inc. shares and a broad surge in tech stocks that sent the Nasdaq 100 to an intraday record....Read More

LOS ANGELES — A federal jury awarded $17 million in damages on Wednesday to the family of a mentally disabled man who was fatally shot by an off-duty Los Angeles police officer inside a Costco in Corona.

WASHINGTON — The head of the House tax-writing committee said a proposal to put a levy on the assets of billionaires won’t be part of negotiations on President Joe Biden’s social spending bill, injecting new ...Read More