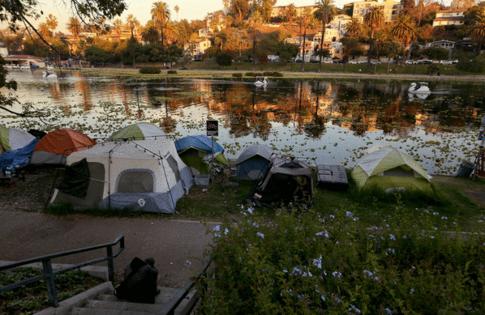 At her lowest, Resheemah “RoRo” White was living in a tent or sleeping on park benches or beneath an underpass in Oakland, California, fearful that her life had bottomed out and she’d never make it back.

White had gotten laid off from her warehouse job at the Port of Oakland, her mother had died, and she could no longer afford an apartment.

“I was just a victim of circumstances and that’s why I ended up homeless,” she said in an interview with Stateline. “I felt like I was nothing. People judged me for living in a tent. They said, ‘She just ain’t nothing.’”

Then a friend told her about a city-funded program run by Downtown Streets Team, a California-based nonprofit, that was giving stipends to homeless residents to pick up trash around the city. White was all in.

The program provided her with gloves, bags, pickers, dustpans and carts, and sent her to different parts of Oakland to clean up trash on sidewalks and in the park. She received a $120-a-week stipend, which she saved up to rent an apartment.

“At first, I said, ‘Picking up trash?’ I had to let my pride go — and I did,” said White, 49. “This program changed my life and my whole outlook and perspective.”

White did so well that she now leads a team that goes into the homeless community and recruits workers. Downtown Streets Team also helped her find a second job as a residential counselor for another nonprofit that assists people without homes in getting housing.

The pandemic has financially stressed millions of Americans, and homelessness has increased. As state and local officials struggle to deal with this, some are investing in programs such as the one that helped White, employing people who don’t have jobs or homes while beautifying streets and neighborhoods.

Some cities are investing tens — or even hundreds — of thousands of dollars in such programs during the pandemic, including Fort Worth, Texas; Portland, Oregon; Pueblo, Colorado; and Tacoma, Washington.