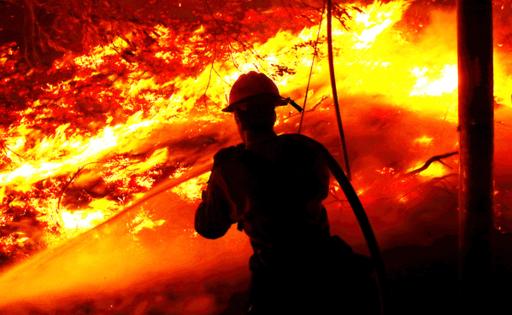 LOS ANGELES — The Alisal fire in Santa Barbara County swelled for the third day as flames closed in on homes, threatened Ronald Reagan’s old ranch and kept the 101 Freeway shut down.

The blaze — the first major wildfire in Southern California this season — arrived amid howling sundowner winds that pushed it over ridges, through canyons and down toward the coast. Drought-parched grasses and chaparral ignited with ease, and fire officials said some airborne embers were landing more than a mile away.

By Wednesday evening, the fire had grown to 15,442 acres and was 5% contained. Santa Barbara County officials declared a local emergency, and Gov. Gavin Newsom secured federal assistance for the blaze.

The area where the fire is burning, which spans from from El Capitan State Beach to Gaviota along the coast and inland toward Solvang, is home to several sprawling ranch properties, many of which have been in the same families for generations.

There are other items of concern tucked among the quiet hillside homesteads, including the presidential ranch, a population of rare plants and a controversial oil processing facility. With more erratic winds expected soon, officials said the worst could be yet to come.

“We’ll be very, very busy out there,” Santa Barbara County Fire Chief Mark Hartwig said during a news conference Wednesday. “We expect that for weeks, if not months, you will see fire crews out there putting out hot spots on this fire.”

The property’s current manager, Flemming Bertelsen, said the fire had come within a quarter-mile of the ranch but that so far it had “dodged a bullet.”

Bertelsen, a former wildland firefighter, said he and four other workers were focused on fuel reduction and structure defense, including clearing away dried leaves and twigs that blew during strong winds. It was far too soon to call the battle won, he said.

Also of concern is an ExxonMobil processing facility in nearby Las Flores Canyon, which has been out of commission since the 2015 Refugio oil spill. Infrared mapping appeared to show the fire burning into the canyon, but Exxon spokeswoman Julie King said no damage has been reported.