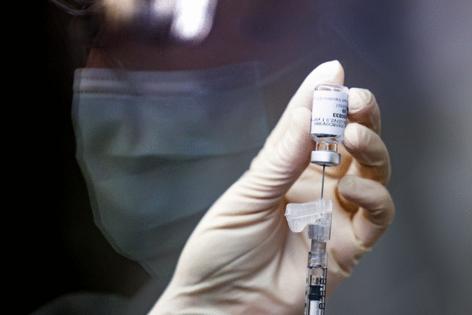 With just days to go before a high-stakes debate to determine which Moderna and Johnson & Johnson recipients receive COVID-19 booster shots, some experts remain confused about President Joe Biden’s goals for the booster rollout.

The White House was expected to meet privately with independent experts to outline and discuss Biden’s endgame for the booster campaign recently.

But scientists and other experts said a proposed Zoom meeting had not been scheduled after the details of an earlier call, in which many argued that boosters are premature, were leaked to the press last week, according to two of the experts.

The result: the Food and Drug Administration and Centers for Disease Control and Prevention are deciding on booster shots while their role in ending the pandemic remains unclear even to some scientists close to the Biden administration.

The FDA’s panel of independent advisers on vaccines, the Vaccines and Related Products Advisory Committee, is set to meet Thursday and Friday to vote on which recipients of the Moderna and Johnson & Johnson vaccines should get another dose. The FDA will then decide on an emergency use authorization and usually, but not always, follows its advisers’ recommendations.

The Advisory Committee on Immunization Practices, or ACIP, the CDC’s panel of independent advisers, plans to meet Oct. 20 and Oct. 21 to endorse, reject or refine the FDA’s emergency use authorization.

“We regularly engage outside stakeholders from the medical community with a broad array of viewpoints for their feedback on administration efforts to fight the pandemic and protect the American public, and that isn’t changing,” said a Department of Health and Human Services spokesperson.

Anthony Fauci, the president’s top medical adviser, has argued that booster shots are needed to prevent infection and symptomatic disease, arguing that even mild disease can have long-term health impacts and could prolong the pandemic.

Skeptics say boosters may not be able to fend off infection very long. Achieving immunity against viruses that infect the upper airway is difficult, which may explain why the vaccines hold up well against severe infections that affect the lungs but not as well against milder cases that impact the nose and throat.

“Even if we give additional doses, the vaccines are not going to prevent all breakthrough infections, so what is the barometer of success?” said a participant on the earlier call, speaking on condition of anonymity. “I think people came away kind of mystified as to what the goals are.”

In its analysis of data Moderna submitted to support the authorization of its booster shot, the FDA noted that the data on waning immunity against infection and symptomatic disease is mixed. The drugmaker submitted data showing a third dose could boost antibody levels, but it didn’t study how that affects how many people get sick. FDA noted that the data showing robust protection against hospitalization and death remains strong.

“There are many potentially relevant studies, but FDA has not independently reviewed or verified the underlying data or their conclusions,” the FDA also noted.

These thorny questions have led to unprecedented public debate, even within the FDA’s ranks, over the role boosters should play in the White House’s pandemic response and whether millions of stockpiled shots should be shipped abroad.

Despite some internal dissent, the FDA’s leaders did not derail the White House’s plans to roll out booster shots during the week of Sept. 20, although the group of people allowed to get a third Pfizer dose was narrower than Biden preferred. Some experts argue Biden politicized a scientific debate by announcing his preferred timeline before the advisers and regulators reached decisions.

“There was a lot of confusion about the goals,” said Jesse Goodman, a Georgetown University biotech expert and former FDA chief scientist, who was not a participant on the call. “But this is what happens when the question and the data aren’t laid out first, but the decision is laid out first. People choose sides and get fixed beliefs.”

Meanwhile, supporters of the booster strategy are getting impatient with calls for more thorough data and calls to donate stockpiled vaccines abroad, saying the White House should be as proactive as possible.

“Every country’s leader’s primary responsibility is to protect the people of that nation,” said William Haseltine, a former professor at Harvard Medical School, HIV expert and biotech investor.

Haseltine said Biden is being unfairly “boxed in” by independent advisers to FDA and CDC.

Michael Osterholm, executive director of the University of Minnesota’s Center for Infectious Disease Research and Policy, said the nation’s leaders are grappling with two different mindsets.

“One is the classic public health approach in an outbreak, where you have to take action based on incomplete information. Versus the time-tested process of FDA review for approvals and ACIP review for approvals, after we have extensive data available collected over the years,” said Osterholm. “A lot of people would like to revert back to the FDA, CDC, ACIP approach, which isn’t gonna happen.”

Several experts said there is not yet enough data to support the idea that boosters could help stave off long-haul symptoms that might occur in breakthrough cases.

“If the booster restores some degree of protection against infections, which may only be short term, it probably would reduce some of those risks, but not eliminate them. But we don’t know,” said Goodman.

But there is evidence to support the idea that long-haul symptoms can occur in many young people with COVID-19 who were never hospitalized, and may have even had asymptomatic cases, including from a recent study of about 97,000 electronic health records.

“If there was a way of preventing even mild COVID, it would help us with preventing more long COVID complications. I think we can say, based on our results, that there is some evidence that can point to the need for a booster shot,” said Hossein Estiri, a Harvard computational demographer and a coauthor of the study. “But there’s nothing [in the data] about whether that should be the priority in front of helping the rest of the world with getting COVID vaccines.”

The purpose of booster shots may be hazy because the way out of the pandemic, with millions of Americans unvaccinated, remains so cloudy.

“What is the total endgame? What is the endgame for everything?” said Luciana Borio, an In-Q-Tel venture capital firm executive and expert in emerging infectious diseases.