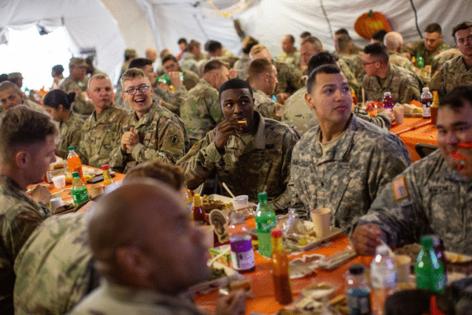 “Reports of military families who struggle with food insecurity, turning in desperation to food pantries around the country, are shocking and unacceptable,” the letter said.

Biden and a broad swath of Congress want to launch such an aid program to combat poverty and hunger in the ranks — a problem that by all accounts the coronavirus has worsened.

But lawmakers disagree on how generous to make the proposed aid, and the White House has said it is undecided on that question.

The letter’s signatories include MAZON: A Jewish Response to Hunger and other influential groups, such as the Military Officers Association of America, Iraq and Afghanistan Veterans of America, National Military Families Association, Blue Star Families and Vote Vets.

Both the House-passed version of the NDAA and the Senate Armed Services one would provide a basic needs allowance. It would cover the difference between a service member’s income and 130% of the poverty level.

But CQ Roll Call reported last month that the House bill explicitly requires that the income calculations must not include the basic allowance for housing, a stipend that about two-thirds of service members get to cover the cost of living off-base or in privately operated housing on base.

The amount of the housing allowance, which is determined by a number of factors, varies. But most Army privates, for example, earned an average housing allowance last year of just over $15,000 on top of just under $21,000 in basic pay, according to the Congressional Research Service.