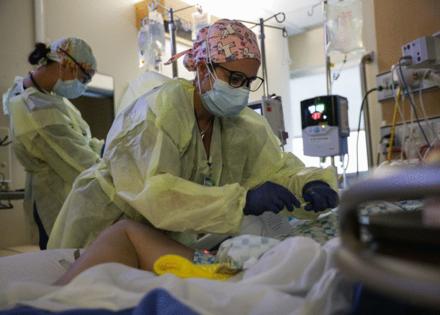 BOISE, Idaho — With the pandemic in its 19th month, Idaho intensive care units still have high numbers of COVID-19 patients.

As of last Thursday, there were 185 COVID-19 patients in ICUs at Idaho hospitals, according to data from the Department of Health and Welfare. And there were 705 patients hospitalized with confirmed or suspected COVID-19.

Health experts have long argued that if the state's and/or the nation's vaccination rate did not reach a high enough level, COVID-19 would become endemic, meaning it would be regularly found and not eradicated. On Tuesday, Dr. Steven Nemerson, chief clinical officer at Saint Alphonsus Health System, told reporters at a Health and Welfare briefing that the virus is here to stay.

"Today I'm here to tell you that we've lost the war," Nemerson said. "The reason it is here to stay is because we cannot vaccinate enough of the public to fully eradicate the disease. And absent being able to do that ... we now need to move into the phase of recognizing that COVID is going to be a disease to be managed for the long-term future."

As of Tuesday, 53.3% of Idaho's eligible population (12 and older) is vaccinated against COVID-19, lower than the nationwide average of 66%.

On Tuesday, the state added 1,941 new cases and 35 deaths to its pandemic totals. But after weeks of rising caseloads, health officials noted that some important viral indicators have declined slightly.

At hospitals, the number of new COVID-19 patients being admitted has not declined, but the number of overall patients has been declining since around Sept. 24.

Dr. Kathryn Turner, the state's deputy epidemiologist, said some of this may be explained by a higher number of COVID-19 patients being discharged from or dying in the hospital.

Nemerson said Saint Al's has seen a decline too.

"While we are seeing this and it creates significant hope that we may have finally reached the peak, there is no guarantee that we have reached that point yet," he said.

For three straight weeks, the state's test positivity rate has declined slightly, although it remains very high, at 14.6%, for the week of Sept. 26. Anything above 5% is problematic.

Turner said she was "cautiously optimistic" about the data and was looking to the next positivity rate update, which will be published Thursday.

"I think if I see a decline in the percent positivity again this week, I think we'll lean more towards, 'we're optimistic,' " she said. "I think four weeks of declines would indicate to us that we would be on the downslope."

Still, the daily numbers released by Health and Welfare are incomplete, because the state is experiencing a major backlog of around 7,800 cases that have yet to be processed, making it difficult to assess the current surge's status.

Of the deaths added on Tuesday, nine were recorded in Ada County and five in Kootenai County. Fourteen of the deaths were individuals younger than 70.