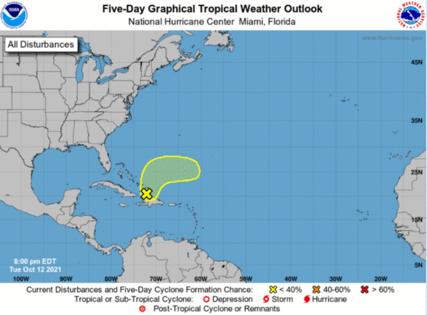 Experts say it is likely to move north Wednesday then east Thursday, turning it away from the Caribbean islands.

Forecasters with the National Hurricane Center say it has a narrow window of about 48 hours for gradual development, if at all. Experts said factors that support development, such as low wind shear, are not present.

It is expected to interact with a front by week’s end, hindering any further development, according to hurricane center.

It has been given a 10% chance of developing within the next five days.

No additional tropical activity is forecast for the next five days, according to the hurricane center’s outlook.

With roughly six weeks left in the Atlantic hurricane season, which runs through Nov. 30, activity in the tropics could heat up again.

“Sometimes [Florida] is more vulnerable [to tropical storm or hurricane development] in October than any other month,” said AccuWeather Hurricane Expert Dan Kottlowski.

This is due largely to the fact that the Atlantic Ocean begins to cool in the fall, but ocean waters around Florida and the Caribbean stay warmer longer. And warm water temperatures support tropical storm development.

“Florida has been hit by about a dozen major hurricanes in the month of October since records began in 1851, which is more than any other state,” according to AccuWeather.

If one more storm or hurricane were to form this season, 2021 would rank third in the record books for the most named storms to develop in one hurricane season. Wanda is the only name remaining on this year’s list of official storm names.

Only twice before, in 2005 and 2020, was the list of storm names entirely used in a hurricane season, according to AccuWeather.

Meanwhile, Hurricane Pamela in the Pacific Ocean is expected to take a path across Mexico into Texas. The storm is likely to be a tropical depression by the time it reaches the Lone Star State, but it is forecast to bring widespread downpours and possibly some flooding this week.

Forecasters said as much as 8 inches of rain could deluge central to northeastern Texas into Friday.