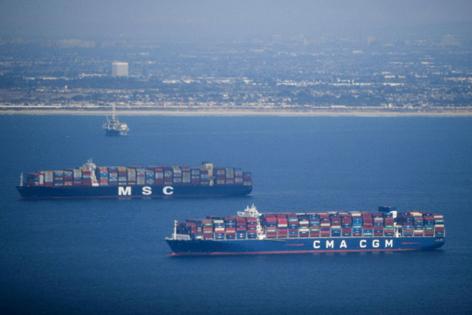 LOS ANGELES — With the ports of Los Angeles and Long Beach facing unprecedented gridlock, investigators are trying to determine what role the congested shipping lanes played in the massive oil spill that has fouled the Orange County coast since early this month.

Investigators are probing possible issues with the way ships are anchoring or drifting off the coast in long lines caused by skyrocketing consumer demand and disrupted supply chains during the pandemic.

Officials believe a ship anchored off Huntington Beach hit an undersea pipe, possibly months before the oil began spilling in the ocean. It’s unclear how a ship came to lower its anchor on a pipeline when the placement of vessels is supposed to be carefully orchestrated to avoid such mishaps.

But the offshore traffic jams have forced ships to wait well beyond their usual zones, dropping enormous anchors near oil platforms and an undersea infrastructure of oil lines.

The Coast Guard and the National Transportation Safety Board are focusing on a period early this year when heavy winds may have shifted large vessels over the pipeline. They are examining which vessels were in the vicinity on Jan. 24 and 25 and gathering data on every vessel traveling near the pipeline since last October.

In the coming weeks, investigators expect to board several foreign vessels to see whether they were anchored near the pipeline in the last year.

Coast Guard investigators have examined several ships that were in the area in the days before the leak and concluded that none of them are likely responsible for the damage to the pipeline, which was last inspected in October 2020.

However, U.S. Coast Guard Capt. Jason Neubauer said no vessels have been completely ruled out. The investigators are focusing primarily on ship traffic at the Port of Long Beach but are also looking at Los Angeles.

An initial ship strike may have moved the pipeline without breaking it. Another collision, or possibly a geological event, could have either “increased the fracture or caused the whole thing,” Neubauer said.

The Los Angeles and Long Beach ports are among the busiest in the country.

ACANDI, Colombia — The boats started arriving midmorning to this fishing town perched on Colombia's torrid Caribbean coast. Disembarking passengers were edgy but excited to be on the move again.

They clambered onto a ...Read More

SACRAMENTO, Calif. — As the Caldor fire roared into the Lake Tahoe basin more than a month ago, Brian Newman took some comfort in the surroundings.

AUSTIN, Texas — After graduating from the University of Texas, Nichole Prescott managed a coffee shop on South Lamar Boulevard.

She received a call from the chief of her Myaamia — in English, Miami — tribe.