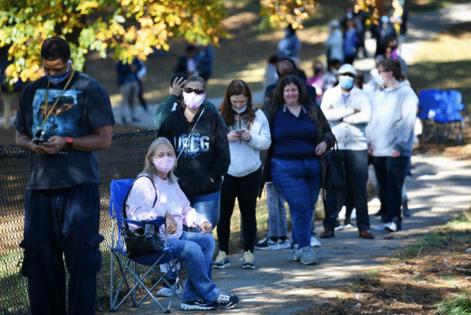 But a body of research on voting rules such as those in Georgia doesn’t support the narrative that turnout will decline significantly because of the law.

Studies in Georgia and across the nation indicate that almost all voters who want to vote will find a way to cast their ballots despite tougher ID requirements, limits on ballot drop boxes and a shorter early voting period before runoffs.

While Georgia’s law reduces the ease of voting in several ways, particularly for those using absentee ballots, that doesn’t necessarily mean a lot of people will be prevented from casting ballots in upcoming elections, such as this fall’s race for Atlanta mayor or next year’s statewide vote.

Still, even relatively small numbers of voters unable to participate could swing election outcomes in Georgia, a battleground state where November’s presidential election was decided by fewer than 12,000 votes.

Academic research shows that voter ID laws have little to no effect on turnout. One nationwide study found that expansions of absentee voting in some states in last year’s election didn’t alter turnout. A federal government report that summarized elections research said the evidence is mixed on whether early voting or no-excuse absentee voting made a difference in turnout.

“We cannot outorganize this level of intensity, this ongoing assault on voting rights,” said LaTosha Brown, co-founder of Black Voters Matter, an organization that mobilizes African Americans to vote. “It is just too big of a burden to bear.”

Future elections will show whether the law stems Georgia’s steadily rising turnout over the past 25 years, reaching a record 5 million in November’s presidential election.

A variety of studies indicate that regulations on absentee voting are more likely to encourage in-person voting than to prevent people from voting at all.

The impact of requiring absentee voters to provide additional proof of their identities is likely “pretty close to zero,” said Trey Hood, a University of Georgia political science professor who has studied voter ID laws.

Absentee voters will have to provide a driver’s license or state ID number, and those who lack those forms of ID can provide a photocopy of other ID, such as a U.S. passport, utility bill or bank statement. Until this year, election officials verified absentee voters by checking the handwriting of their signatures and confirming their voter registration information.

“People will adjust and comply with the law, and most people are already in compliance,” Hood said. “I used to have to sign my ballot, and now I’ve got to put my driver’s license number on my ballot envelope. Well, that’s not much of a hassle.”

Hood found that voter ID requirements for in-person voting that began in 2008 in Georgia reduced turnout that year by four-tenths of a percentage point, according to a study he co-wrote titled “Much ado about nothing? An empirical assessment of the Georgia voter identification statute.”

The new ID requirements for absentee voting will have even less of an effect today than 13 years ago because almost every voter already has the ID they’d need to cast a ballot. About 2% of registered voters lack a driver’s license or state ID number.

“The idea that somehow this is going to change turnout, I think it’s just not true,” said von Spakovsky, a former member of the Fulton County elections board. “People want to vote, they’re going to go vote, and they have so many different ways of doing it today that making some slight change is just not going to affect that.”

One voting policy change that will likely matter to some extent: limitations on ballot drop boxes.

Georgia’s voting law prohibits drop boxes on Election Day or the prior three days, eliminating an opportunity for last-minute absentee voters to participate without having to rely on the U.S. Postal Service. Ballots received by election officials after polls close on Election Day are rejected in Georgia.

The percentage of ballots rejected for being late declined when Georgia allowed widespread usage of drop boxes in last year’s elections. About 0.3% of absentee ballots were returned too late in November’s presidential election compared with 1.7% rejected for lateness in 2018, according to state election data. That amounted to 4,117 absentee ballots received after the state’s Election Day deadline in November.

“They’re essentially shifting more voters to rely on the Postal Service. If they send the ballot too late, and it doesn’t get there in time, that person is not going to be able to vote, and they’re likely not going to know it,” said Amber McReynolds, the founding CEO for the National Vote at Home Institute, an organization that advocates for voting access outside polling places.

Drop boxes were the most significant change to Georgia’s elections last year, an innovation approved by the State Election Board in response to the coronavirus pandemic. State law has allowed anyone to cast an absentee ballot without having to provide a reason since 2005.

Other research, however, points to a correlation between usage of mail ballots and higher turnout in 2020. States with higher usage of mail ballots generally had greater voter participation in last year’s election, according to “America goes to the polls 2020,” a report by Nonprofit VOTE and the U.S. Elections Project. Georgia had the nation’s 26th-highest turnout rate, at 68% of voting-eligible population.

Turnout depends on the perceived importance of an election, with voters more determined to cast ballots in presidential races than in midterms or local elections.

Voting regulations might matter less when the population is highly motivated to make itself heard, as in 2020, said Max Wood, CEO of Deck, a data analytics firm for liberal campaigns. But voting laws such as Georgia’s would likely have a larger impact in elections where voters aren’t as engaged.

“I’m very concerned,” Wood said. “Some of the most important variables were proximity to drop boxes or the deadline for requesting a ballot or returning a ballot. People love returning their ballots in the last week, so really strict cut-offs increase the number of rejected ballots.”

The connection between early voting availability and turnout is also unclear, according to a 2016 report by the U.S. Government Accountability Office.

Georgia’s law reduces in-person early voting before runoffs from three weeks to one week or “as soon as possible” after the general election. The change occurred because runoffs will be held four weeks after elections instead of nine, leaving less time for election officials to print ballots and test equipment before voting can begin.

“There are a number of factors that far outweigh the minutiae of an election bill in terms of turnout,” Lawson said. “What is the national conversation going on? What are some of the policy issues that are being discussed? Those things are going to have far more significant impact on turnout.”

The consequences of the law remain to be seen since it hasn’t yet been tested in major elections.

Turnout in next month’s elections for mayors and city councils will provide initial information on how voting patterns change for absentee, early and Election Day voting. About 30% of active voters participated in the election for Atlanta mayor four years ago, and turnout increased to 62% in the 2018 midterms and 68% in last year’s presidential election.

— Voter ID: Voters must provide a driver’s license or state ID number when requesting and returning absentee ballots unless they don’t have those forms of ID. Voters can also attach a photocopy of a U.S. passport, military ID, voter ID card, utility bill, bank statement, government-issued check or other government documentation.

— Drop boxes: Absentee ballot drop boxes will be available only during early voting hours and inside polling places. Each county is required to offer at least one drop box, but their number is capped at one per 100,000 active registered voters.

— Provisional ballots: Ballots cast in the wrong precinct won’t be counted except in the last two hours before polls close.