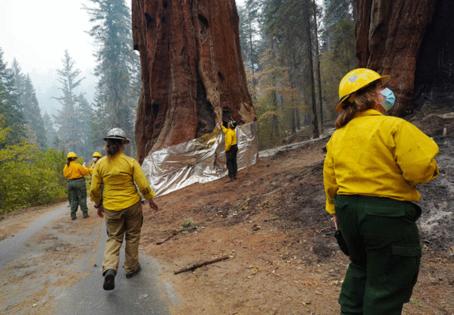 As flames from the KNP Complex threatened to race up a steep slope toward the remote Muir Grove of giant sequoias, officials at Sequoia and Kings Canyon National Parks had to think fast.

The right conditions could send flames shooting into the tops of the towering trees in Sequoia National Park, slaying the old-growth giants.

Christy Brigham, chief of resources management and science for the parks, was desperate to save the ancient trees, which couldn't be reached to treat with traditional protection methods. She opted to go "experimental."

Brigham made the call to drop a goopy fire-retardant gel on a small portion of the grove.

The polyacrylamide gel, similar to what's in baby diapers, is thicker and stickier than the typical retardant used in aerial firefighting tactics. The theory was that it would adhere better to the grove's canopy and could be reactivated with water just before flames arrived if it dried out.

But the gel had never been used on sequoias before, Brigham said.

"Do we want to try this?" she said. "Or do we want to take our chances that another grove … of irreplaceable 2,000-year-old trees" will be incinerated?

The novel firefighting method is the latest that fire officials and tree experts have implemented in the face of twin wildfires that have been rampaging through California's southern Sierra Nevada for the last month.

Since igniting Sept. 9 amid a huge lightning storm, the KNP Complex and the nearby Windy fire — which is burning in Sequoia National Forest and the Tule River Indian Reservation — have charred more than 184,000 acres combined , including at least 26 groves of giant sequoias.

The massive trees have adapted through the centuries to withstand low-intensity fire, and they even need flames to reproduce. But experts say the drought-stressed sequoias are increasingly no match for extreme blazes stoked by climate change and a buildup of bone-dry vegetation.

ACANDI, Colombia — The boats started arriving midmorning to this fishing town perched on Colombia's torrid Caribbean coast. Disembarking passengers were edgy but excited to be on the move again.

They clambered onto a ...Read More

SACRAMENTO, Calif. — As the Caldor fire roared into the Lake Tahoe basin more than a month ago, Brian Newman took some comfort in the surroundings.

AUSTIN, Texas — After graduating from the University of Texas, Nichole Prescott managed a coffee shop on South Lamar Boulevard.

She received a call from the chief of her Myaamia — in English, Miami — tribe.