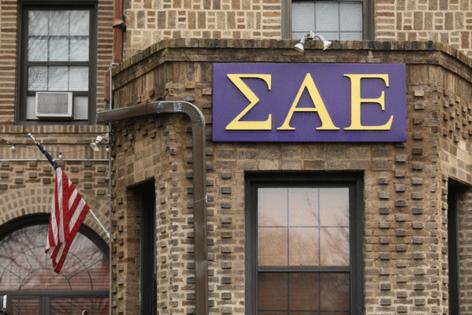 One person said they had been drugged Friday at a gathering at 2325 Sheridan Road in Evanston, the site of the Sigma Alpha Epsilon fraternity, currently in its first year back after a yearslong suspension stemming from conduct the student-run Interfraternity Council in 2017 said made ”the Northwestern community less and less safe.”

The alert that went out to Northwestern students also said the university was investigating “separate, similar reports it received on Sept. 24,” and noted “both reported locations are on-campus fraternity houses.” It also reminded students that on-campus fraternity and sorority houses are alcohol-free spaces.

“Let us be clear: The health, safety and well-being of our students remain our top priority and we are taking these allegations very seriously. We encourage you to seek support from campus resources if you need help processing this news,” said the alert, signed by the University’s police chief and a dean of students.

The university also decided to immediately discontinue social events or official recruitment activities at fraternities that are part of the Interfraternity Council, until at least Oct. 17. In its statement, school officials said that includes events with nonmembers, such as alumni. It also warned that any individuals or organizations that violate the restriction will be referred to the Office of Community Standards.

“The University has been in communication with IFC leadership, who understand the seriousness of these reports and the importance of the investigations,” it said.

The Interfraternity Council Saturday “unanimously passed a resolution outlining restrictive measures in partnership with the University’s decision, and communicated to the University that they are instituting a ban on all social activities inclusive of recruitment events during this time frame.”

Also in response to the recent allegations, a flier circulated on social media for a Sunday night event named the “Abolish Greek life protest,” for which students were encouraged to dress in black and meet outside SAE at 7 p.m. to “support survivors” and “demand more than temporary punishments.”

A female student in her second year who organized the event and who spoke on the condition of anonymity because of privacy concerns said the protest was well-attended.

The Interfraternity Council is a student-run organization that in 2017 suspended the campus chapter of Sigma Alpha Epsilon from its membership until the start of the 2021-22 school year, according to a statement. SAE appealed the decision and was allowed to remain in its campus housing through the end of that school quarter, in June, as a result.

SAE members were accused of walking out of a student government meeting where people who said they were victims of assault and others shared concerns about NU fraternity culture, according to the 2017 IFC statement.

The Council also stated that SAE hosted social events and recruited new members outside of IFC purview, thus violating rules of the fraternal governing body, according to the statement.

The school statement this weekend said counseling services would be available for anyone who needs assistance. It also asked anyone with information about any of the reports to contact Northwestern University Police at 847-491-3456.