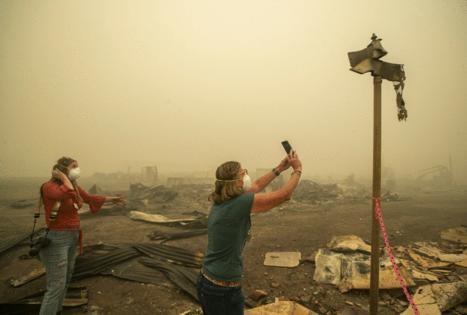 When the Dixie fire sparked in Plumas County on a warm afternoon in July, few could have known that it would morph into the monster it soon became. A downed tree, a blown power line fuse and a small ring of fire were all it took to create the second-largest wildfire in California history.

In the days and weeks after the fire began, it produced one ominous sign after another — generating its own lightning, burning clear across the Sierra and, most horrifically, reducing the town of Greenville to ashes.

Soon it was threatening to surpass the size of the August Complex of 2020, the largest wildfire in California history, which burned more than 1 million acres.

But after nearly two months of nonstop expansion, something shifted. Seemingly overnight, the weather grew more favorable, the fiery terrain leveled out, and crews were able to turn a corner on the massive blaze. The Dixie fire stopped growing, as if frozen in time, at about 963,000 acres. As of Friday, it was 94% contained.

“We just can’t get used to these kinds of numbers,” said Scott Stephens, a professor of fire science at UC Berkeley. “That size is just mind-blowing.”

Many experts said the speed and scale of the Dixie fire’s spread sent a clear message about the toll extreme heat and drought are having on California’s overgrown landscape. It also amplified the urgent need for more proactive measures to prevent similarly massive fires.

“The Dixie fire is the final, nail-in-the-coffin piece of evidence that traditional firefighting methods are not up to the challenge of the kind of wildfires we get in the 2020s,” said Chris Field, director of Stanford University’s Woods Institute for the Environment. “Basically, this fire jumped over everything that we would have considered a traditional defensible fire line.”

Field attributed a few factors to the Dixie fire’s growth — most critically, the century of fire suppression that enabled vegetation to pile up in the state’s forests. When that drought-dried vegetation met with embers from the Dixie fire, it easily ignited, enabling the blaze to “carve its own path like a glacier.”

“It’s a really scary confirmation of the extensiveness of the fuel buildup,” Field said, “and that basically we’re in an era now where any place you drop a match or a burning ember, you get a new fire. And that vulnerability is really hard to deal with.”