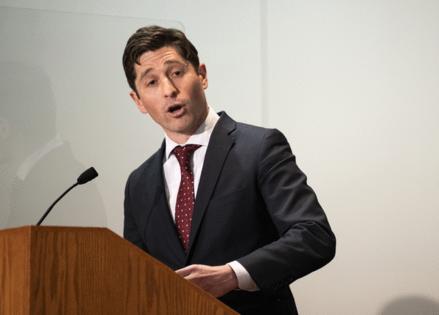 A large banner supporting Jacob Frey hung above the entrance to the Karmel Mall as he strode in recently to campaign for a second term as Minneapolis mayor.

The embattled leader told voters that no one is better positioned to create a more diverse police force, more affordable housing and greater economic opportunity for all as the city emerges from one of its most trying times in history.

Down in the polls and without the DFL endorsement, Frey is sharing that message at countless small gatherings in a frantic final push to win over an electorate still reeling from the police killing of George Floyd, a global pandemic and a violent crime wave.

But not everyone at the East African cultural hub greeted him with kindness.

"What have you done for us in the last four years?" asked a stern Mohamed Ali Hassan, president and founder of the Somali American Peace Council. "There needs to be some accountability. I can't just vote for you again."

Frey has worked under an intense international spotlight since Floyd's death forced the city into the epicenter of a reckoning over policing and racism. It placed the mayor at odds with many members of the City Council and powerful political forces bent on reducing police funding. Others, meanwhile, pushed him to quickly hire more officers as the city grappled with a police shortage and an increase in violent crime.

A new Minnesota Poll found city voters evenly divided on Frey's approval rating six weeks before the election, with about 1 in 3 approving and disapproving of Frey's job performance and 29% with no opinion. But 55% of voters said the city should not reduce the size of its police force, a position Frey also supports.

'Nature of the job'