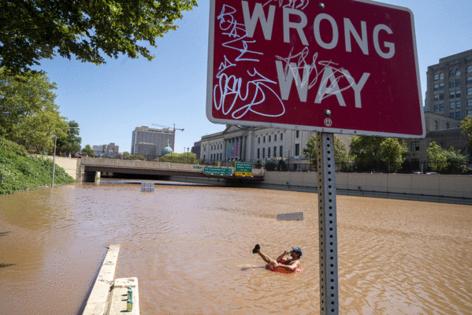 PHILADELPHIA — Tropical storms are like so many lottery balls bobbing in the sea, with all the sense of direction one might expect from things that spend their careers spinning in circles.

So what has been happening the last two years is rather extraordinary, and it helps explain why the Philadelphia region has been affected significantly by six tropical storms or their remnants, four of those in 2021, a development that veteran meteorologists say might be unprecedented.

But it’s not just the raw numbers: Compared with the 2009-19 period, which included some quite active seasons, a significantly higher percentage of those storms in the last two years have made U.S. landfall.

“We’ve had a lot of storms, which increases the odds of impacts,” said Philip Klotzbach, a scientist at the Colorado State University, long a pioneering hurricane-research hub.

The deeper mystery is why tropical cyclones have developed such an affinity for U.S. soil.

While climate change is having effects on tropical cyclones, the Geophysical Fluid Dynamics Laboratory, a go-to source in the research community, has found ”no strong evidence of increasing trends in U.S. landfalling hurricanes.”

This gets messy, but the best current estimate is that warming is adding about 3% to rains within about 60 miles of a storm’s core, said Matt Rosencrans, hurricane specialist with NOAA’s Climate Prediction Center. Thomas L. Knutson and associates at the laboratory, located in Princeton, estimate that will increase to 10% to 15% by the end of the century if global temperatures continue to rise.

Water — not wind, even though it is the basis of the hurricane rating scale — is the the No. 1 cause of tropical storm fatalities, accounting for nearly 90% of them, according to a study by the National Hurricane Center’s Edward N. Rappaport.