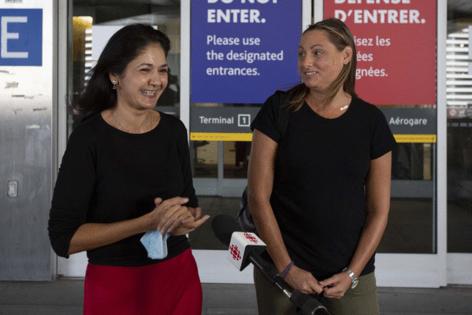 “These two men have gone through an unbelievable difficult ordeal for the past 1,000 days, they have shown strength, perseverance and grace and we are all inspired by that,” Prime Minister Justin Trudeau said during a late Friday night news conference in Ottawa.

He did not disclose the terms of his release during the announcement.

The two men imprisoned were a former diplomat, Michael Korvig and businessman Michael Spavor. They both were arrested on suspicion of espionage after Canadian authorities arrested Huawei executive Meng Wanzhou on a U.S. warrant for her business that he conducted in Iran.

On Friday afternoon, the Department of Justice said that federal officials and Meng agreed to postpone prosecution of her until late next year. Charges could be dropped shortly after that deadline, CNN reported.

Meng departed Canada on a Chinese-government flight and celebrated her release on the Chinese social media app WeChat.

“As we get closer to home, I feel increasingly emotional, with tears welling up in my eyes,” Wanzhou said. “Under the leadership of the Chinese Communist Party, our motherland is moving toward prosperity. Without this strong motherland, I wouldn’t have my freedom today. I thank my beloved motherland, and I thank the Party and the government ... for shining a light during my darkest hours and guiding me in my long journey home.”

The U.S. case against Wanzhou, who is the CFO of Huawei, is centered around whether or not she lied to HSBC bank about her dealings with an Iranian company, Skycom. The U.S. has previously accused of Skycom would have violated sanctions against Iran.