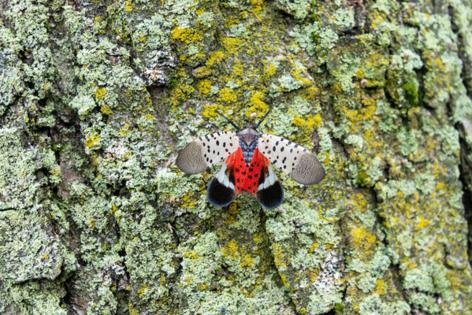 DETROIT — A small, winged pest some people even think is pretty is getting a lot of attention online, as agriculture and natural resource experts warn that it can do considerable damage to grapes and, once established, is difficult to kill.

Lycorma delicatula — better known as the dreaded spotted lanternfly — made its way from Asia to the United States at least a decade ago, and agriculture officials now fear it's slowly making its way to Michigan and other nearby states.

Adult spotted lanternflies are identifiable by their bright body and wing colors.

"It's a pest we are concerned about in the state of Michigan," said Robert Miller, an invasive species expert with the state's agriculture department. "We are asking the public to be on the lookout and to report it if they think they see it. I can't say if and when it will arrive. But I think there's a possibility we'll see it eventually."

In the meantime, the internet is turning the insect into an evil Mothra.

In the last few days, there have been multiple online reports and warnings. Many, if not most, of the headlines, invoke the language of violence and death. CBS: "There's a beautiful spotted insect flying across the U.S. — and officials want you to kill it." The New York Times: "Die, Beautiful Spotted Lanternfly, Die"

Other publications got even more creative: The Staten Island (N.Y.) Media Group mentions a squishathon, the Gothamist, also in New York, screams, "We're Gonna Need A Bigger Boot," and NJ.com wants you to watch a video of a guy who "killed thousands of spotted lanternflies in days."

It could be considered a lot of clickbait.

But beyond the hype, the lanternfly is a real problem without much of a solution.

Miller points out one of the consequences of global travel and trade is that insects, animals, and plants are increasingly ending up in places they shouldn't be, and in many cases destroying the environments around them.

Invasive species are not a new problem.

When Christopher Columbus sailed the ocean blue in 1492 he initiated what historians now call the Columbus Exchange, a transfer of ideas, diseases, crops, and even populations between the New World and the Old World.

The spotted lanternfly — what ag departments have been calling SLF — was first detected in southeastern Pennsylvania in 2014 but appeared to have been in the United States for two to three years already. They are about an inch long and half an inch wide, with eye-catching wings.

When their wings are open they show a yellow and black abdomen and bright red hind wings with black spots transitioning to black and white bands at the edge. Egg masses look like old chewing gum, with a gray, waxy, putty-like coating.

The bugs, which hop more than fly, likely arrived in America aboard a shipping container.

Since then, the bug has spread to Delaware, Virginia, New Jersey, New York, Maryland, West Virginia, Connecticut, and Ohio.

Earlier this year, one was spotted in Indiana. It was the farthest west the insect has been found.

And New York has deputized residents in its fight to stop it, launching an app to log where they are found.

Earlier this month, a kid in Kansas pinned one on a 4-H display at the state fair.

If the spotted lanternfly enters Michigan, it could affect Michigan’s agriculture and natural resources, damaging more than 70 varieties of crops and plants including grapes, apples, hops, and hardwood trees. In subdivisions, it leaves a stick, stinky residue on trees that attracts mold and other critters.

Pesticides can kill it, but it will also kill other things, too.

In Michigan, if you find spotted lanternfly eggs, nymphs or adults, take photos, make notes of the date, time and location of the sighting, and report it to the state department of agriculture at MDA-Info@Michigan.gov or 800-292-3939. If possible, collect a specimen for verification.