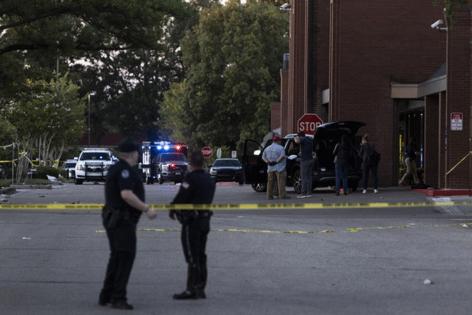 Authorities on Friday identified the shooter as 29-year-old UK Thang, but Police Chief Dale Lane refused to mention his name during a morning news conference, instead requesting reporters collect the information at the end of the briefing.

“We don’t want to give him notoriety,” he told news outlets.

The chief said the shooter was a third-party vendor at the store in Collierville, a suburb about 30 miles east of Memphis.

Aung Kyaw, who knows Thang’s parents but did not know the shooter personally, revealed that Thang had a sushi business that operated inside the Kroger. He did not know the details of Thang’s business arrangement with the grocery store chain.

Lane added that while officials are “getting a clearer picture of what occurred,” he stopped short of revealing the shooter’s motive. He said Thang, who was found dead by authorities in the back of the store, had previous “minor charges.” The chief did not share further information.

Gunfire erupted around 1:30 p.m. on Thursday inside the Kroger, sending shoppers and employees fleeing for their lives. Some hid in freezers while others camped out in locked offices. One Kroger employee was rescued from the roof.

Lane called the shooting “the most horrific event that’s occurred in Collierville history.”

Olivia King, a mother of three who had just attended church, was shot in the chest amid the chaos and later pronounced dead at the nearby Regional One Hospital.

Lane said authorities also learned of an additional victim, bringing the total number to 15. Three of them required emergency surgery in wake of the bloody attack, but everyone managed to survive, the Memphis Commercial Appeal reported.

“Thankfully, our prayers were answered: We didn’t lose anybody overnight,” he said. “There’s still some people battling, so continue to pray for them, as well.”

Of those who were shot, 10 were store employees and five were customers, according to authorities.

“In the hours since the shooting, we’re learning of truly heroic acts that included associates, customers and first responders selflessly helping to protect and save others,” Kroger said in a statement. “We will remain forever grateful to the first responders who so bravely responded to protect our associates and customers.”

The store will remain closed during the police investigation, though workers are still being paid, Kroger said.