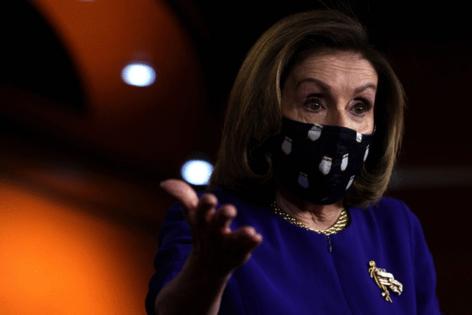 WASHINGTON — House leaders said Friday they’ll try to pass both major pieces of President Joe Biden’s economic agenda in their chamber next week in a high-stakes test of Democratic Party unity and resolve. But they aren’t making firm promises on timing.

Speaker Nancy Pelosi said the House would consider a bipartisan infrastructure package on Monday, though she left the door open to postponing a final vote on the measure. “We will have a vote when we have the votes,” she said.

Asked about a floor vote next week on the still-evolving $3.5 trillion package of new spending and tax breaks for clean energy, child care, health insurance, affordable housing and more, Pelosi hedged. “That’s the plan,” she said. House Majority Leader Steny H. Hoyer, told reporters he planned to announce the reconciliation bill as a “possibility” for next week’s floor schedule.”

A little later on her way out of the Capitol, Pelosi gave a more mysterious answer. “Have a little patience,” she told reporters. “Follow it, see it unfold. It’s very interesting. We’re very encouraged.”

To set the table for potential movement on the larger reconciliation package next week, the House Budget Committee is scheduled to mark up the 2,465-page measure on Saturday. The panel’s role is procedural, and it can’t make any substantive changes to the bill, nor are any amendments allowed.

Actual changes to the legislation that 13 other panels contributed to earlier this month wouldn’t come until the measure heads to the Rules Committee, which Budget Chairman John Yarmuth, D-Ky., said wouldn’t be any earlier than Tuesday.

It’s likely there will be some changes to win over wavering House members, potentially on issues like prescription drug pricing, before a floor vote. But it’s far from clear differences between House and Democrats can be papered over before a potential House vote next week.

And that’s causing problems for the reconciliation vote and the separate infrastructure package, which would provide $550 billion in new spending above current projections for a range of programs, from roads and bridges to broadband and wastewater treatment projects. Progressives say they have the votes to defeat the Senate-passed infrastructure bill unless they have at least a commitment from senators that the broader reconciliation bill can pass in that chamber.

Rep. Josh Gottheimer, D-N.J., a leader of the moderate faction pushing the bipartisan infrastructure bill, wouldn’t promise a vote on the measure on Monday, despite securing a provision last month affording them the ability to bring the bill to the floor by then.

“We’re going to vote next week,” was all he said. But, Gottheimer added: “Let me be clear. We’ve got the votes.”