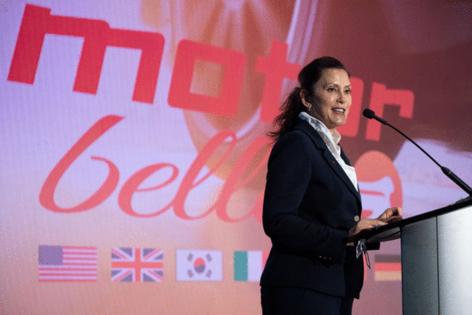 Whitmer's spokesman Bobby Leddy labeled the language "dangerous" in a Friday afternoon statement, adding that it's unconstitutional and "the governor will declare it unenforceable."

"The state of Michigan will not withhold funding from local health departments for implementing universal mask policies or quarantine protocols in local schools that are designed to keep students safe so they can continue learning in person," Leddy added.

The so-called "boilerplate" language inserted in the budget by Republican legislative leaders stipulated that local health officers cannot "enforce any orders or other directives that require an individual in this state who is under the age of 18 to wear a face mask or face covering." The orders are intended to fight the spread of COVID-19.

Multiple county health officials in Michigan have imposed orders that require K-12 students to wear masks in schools, including those in Oakland and Wayne counties — the state's two most populous counties. Republicans have opposed the mandates, arguing that people should make decisions for themselves.

The policy on mask orders was one of a series of similar measures attached to the budget by GOP lawmakers who control the state Legislature. Republican leaders say some of the provisions, including a ban on vaccine mandates for government employees, had been negotiated with Whitmer's administration ahead of time, meaning they expected them to remain after her administration examined them.

Some Republican lawmakers admitted that they didn't know whether Whitmer would allow the prohibition on mask requirements for kids.

State Sen. Tom Barrett, a Charlotte Republican, posted on Facebook earlier in the week that he championed the policy against face mask mandates. The decision should be for parents to make "without interference from the government," Barrett wrote.

"While she has signaled that she will not enforce this provision, she is not allowed to simply ignore the plain language of the law I have attached the section here for you to read for yourself," Barrett posted. "This fight isn't over yet, but this is a great step in the right direction."

Traditionally, the governor has had the ability to strike language attached to the budget if the administration deems it unconstitutional.