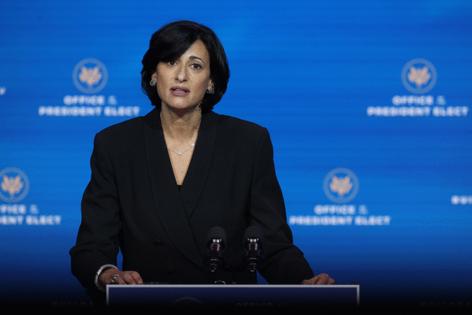 It was up to Centers for Disease Control and Prevention director Rochelle Walensky to sort out a crucial question: which Americans should be the first to get COVID-19 booster shots.

And there was little consensus.

The CDC’s Advisory Committee on Immunization Practice on Thursday voted narrowly to restrict eligibility for boosters of the Pfizer Inc.-BioNTech SE shot authorized by the Food and Drug Administration. Walensky had a choice: side with the advisers, citing the paucity of data on whether younger, vaccinated adults are truly at risk of severe breakthrough cases of COVID-19. Or overrule them, and err on the side of boosters for front-line health workers and others.

Shortly after the panel’s vote, Walensky called Health and Human Services Secretary Xavier Becerra to lay out the options in front of them, and then met privately for hours with CDC officials to come to a decision, according to people familiar with the process.

Several factors weighed on Walensky, who revealed some of her thinking in a news briefing Friday afternoon. Nurses, teachers and others on the front line had put themselves at risk for the past year and a half, and intensive care units are full across parts of the country. Equity, too, was a factor: frontline workers disproportionately come from minority communities that have already paid a disproportionately high price in the fight against COVID-19.

“Withholding access for boosters from these people and communities would only worsen the inequities that I have committed to fight against,” she said Friday.

Late Thursday, she made a decision. The CDC ACIP panel was overruled, with Walensky expanding eligibility for boosters broadly to include those 18 to 64 at risk of workplace exposure, including health-care workers.

Walensky, who headed a division at a Boston hospital before Biden picked her to lead the CDC, was particularly motivated by her belief that nurses and other health officials on the front lines, working in COVID-19 units, should be eligible for third shots, according to one of the people familiar with the matter. Under the CDC advisory committee’s recommendation, they wouldn’t have been booster-eligible unless they had an underlying health condition, and many are already eight months past their second shot.

Walensky and other CDC officials discussed the issue deep into the evening on Thursday before settling on a decision. She called Becerra and told him, and HHS informed the White House shortly after 11 p.m., the people said. She announced her recommendations publicly just before midnight.

Though she is a political appointee, there’s no indication the White House directly influenced her decision. President Joe Biden didn’t speak to her as she considered her statement, nor did two of his top aides, Chief of Staff Ron Klain and COVID-19 Coordinator Jeff Zients, one of the people said.