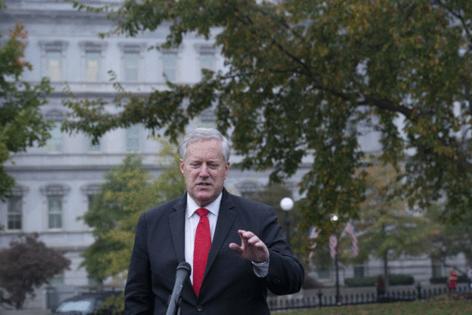 The subpoenas are the first issued by the committee and they instruct Meadows and Scavino to appear at depositions in Oct. 15 and Patel and Bannon, a day earlier, on Oct. 14. The subpoenas also demand that they produce documents by Oct. 7.

“The Select Committee is investigating the facts, circumstances, and causes of the Jan. 6th attack and issues relating to the peaceful transfer of power, in order to identify and evaluate lessons learned and to recommend to the House and its relevant committees corrective laws, policies, procedures, rules, or regulations,” committee Chair Bennie Thompson said in letters to the four men.

The subpoenas mark a new phase in the investigation, one that is likely to spark legal battles.

The committee, made up of seven Democrats and two Republicans, had already requested information involving Trump and members of his White House staff. The National Archives was asked to turn over White House documents provided to Trump or Meadows with terms such as “rigged” election or “stealing” the election.

Thompson, a Mississippi Democrat, has said that in addition to examining how law enforcement and intelligence agencies operated, the panel would look into events at the White House on the day of, and after the riot, which occurred as Congress was meet to certify Joe Biden’s victory in the 2020 presidential election.

Members of the committee have made clear that Trump’s activities that day are a central focus of their inquiry.

Committee member Adam Schiff, a California Democrat, said Thursday that the panel might recommend potential criminal prosecution by the Justice Department for “those who willfully and in bad faith resist cooperating, when they’re compelled to do so.”

The committee has to “anticipate that there are people who don’t want to talk — because they feel that would incriminate them or incriminate others,” Schiff said.

For instance, Thompson writes to Meadows, “It appears you were with or in the vicinity of President Trump on Jan. 6, had communications with the President and others on Jan. 6 regarding events at the Capitol, and are a witness regarding activities of that day.”

The letter also states that documents provided by the Department of Justice showed he “communicated directly with the highest officials” at the department “requesting investigations into election fraud matters in several states.”

Thompson, in his letter to Bannon, says he “has been identified as present at the Willard Hotel on Jan. 5th, 2021, during an effort to persuade members of Congress to block the certification of the election the next day.

The letter also states Bannon has been described as communicating with Trump on Dec. 30 and other occasions, urging him to plan and focus for Jan. 6. “Moreover, you are quoted as stating on on Jan. 5th, 2021, that “(a)ll Hell is going to break loose tomorrow,” Thompson writes.

TACOMA, Wash. — The search for the shooter who terrorized Tacoma Mall shoppers Friday night entered its second day Saturday as a victim recovered in a local hospital.

DAYTON, Ohio — The city of Dayton has received approval to tear down a property that was briefly home to the Wright Brothers’ first bike shop, then was used by the Gem City Ice Cream Co. for decades.

SAO PAULO, Brazil — The governor of Brazil’s richest and most populous state was picked by the Brazilian Social Democracy Party as its candidate for next year’s election challenging President Jair Bolsonaro.