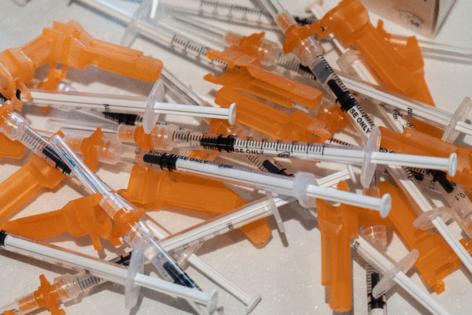 DETROIT — More than 300,000 doses of COVID-19 vaccines are on the verge of expiring in Michigan as demand for shots wane right as the state stares down what appears to be a fourth surge of cases.

The Michigan Department of Health and Human Services estimates that about 161,000 doses of the Johnson & Johnson vaccine and between 143,000 and 146,000 doses of the Moderna vaccine expire near the end of this month, said Lynn Sutfin, a spokeswoman for the health department.

Eighteen months into the pandemic, 1 in 10 Michiganians have tested positive for COVID-19. One in 485 have died. And for months now, the number of people getting first doses of a vaccine has been dropping to a trickle.

The number of shots getting into people’s arms has been below 100,000 since the weekend of June 26, down from an April peak of 679,409 doses administered. Excluding this week, for which numbers are not yet completed, providers have been administering an average of 70,000 doses a week for three months, according to state data.

"The urgency and fear is just not there as much as it was in the first few weeks of vaccinations being broadly available," said Dr. Asha Shajahan, medical director of community health for Beaumont Grosse Pointe. "But it is the same virus as it was when we had shutdowns and businesses were closed. You can still get really sick, especially with the variants."

Data provided by MDHHS indicates as many as 27,000 vaccine doses may have already expired in the state, although Sutfin was not able to provide an exact number. Expired doses are disposed of as medical waste. Another nearly 196,000 were drawn from vials — each vial has multiple doses — but ultimately not used.

If kept in the right conditions, the Moderna vaccine can last about six months, as does the Johnson & Johnson vaccine. The Food and Drug Administration last month extended the shelf life of the Pfizer vaccine from six months to nine.

Meanwhile, the number of vaccines delivered to providers peaked at 906,360 doses the week of April 10 but also has since fallen off, state data shows. That number plummeted to fewer than 100,000 doses a week from mid-June to mid-July and has never been more than a third of the spring weekly peak since.

In total, 13.1 million vaccine doses have been delivered to providers in Michigan, and about 9.8 million have been administered, according to state data.

Michigan is not alone in seeing the number of people getting vaccinations slow from springtime highs, when people who were eager for shots were crowding pharmacies and mass vaccination sites like Detroit’s Ford Field and TCF Center.