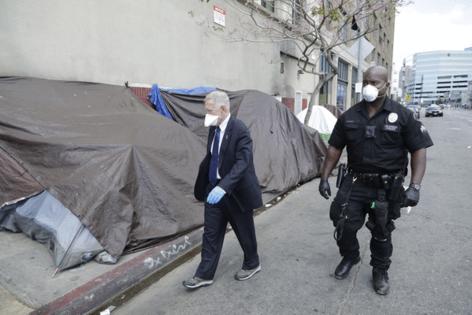 LOS ANGELES — A federal appeals court on Thursday unanimously overturned a judge’s decision that would have required Los Angeles to offer some form of shelter or housing to the entire homeless population of skid row by October.

A three-judge panel of the 9th U.S. Circuit Court of Appeals ruled that U.S. District Judge David O. Carter, who issued the homelessness order in the spring, failed to follow basic legal requirements. It was a sharp rebuke of Carter, who has focused intently on homelessness, regularly venturing into encampments at all hours of the day, engaging with a wide array of officials responding to the crisis and issuing rulings on the subject in both Los Angeles and in Orange County, where he lives.

The ruling Thursday applied to only one slice of the sprawling lawsuit — the order to clear skid row of tents — but it called into question its broader underpinnings.

The panel said most of those who sued the city and county of L.A. had no legal right, or standing, to bring the case. Carter deployed “novel” legal theories that no one had argued, and ruled on claims that no one had alleged and on evidence that was not before him, the 9th Circuit said.

“The district court relied on hundreds of facts contained in various publications for their truth, and a significant number of facts directly (underpinning the order) are subject to reasonable dispute,” wrote Judge Jacqueline H. Nguyen, who was appointed by President Barack Obama.

Carter’s order, which sent shock waves through local government, stemmed from a lawsuit brought by a coalition of downtown business owners, residents and some formerly homeless people. The city and county of Los Angeles appealed.

The 9th Circuit noted that Carter, appointed by President Bill Clinton, based his decision on racial discrimination, though the lawsuit by the L.A. Alliance for Human Rights did not allege racism was a factor.

“Because plaintiffs brought no race-based claims, they did not allege or present any evidence that any individual plaintiff or LA Alliance member is Black — much less Black and unhoused, a parent, or at risk of losing their children,” Nguyen wrote.

Moreover, the 9th Circuit said, there was no evidence that any plaintiff was Black, risked family disruption or was confined to skid row.

“The district court undoubtedly has broad equitable power to remedy legal violations that have contributed to the complex problem of homelessness in Los Angeles,” wrote Nguyen, who was joined by two other Obama appointees. “But that power must be exercised consistent” with the law.