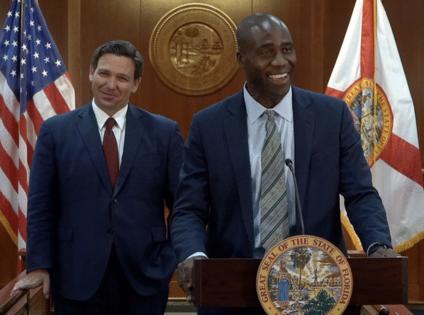 TALLAHASSEE, Fla. — For the first year and a half of the coronavirus pandemic in Florida, it was difficult to heed the advice of Florida’s top health official — Dr. Scott Rivkees — because he rarely publicly shared his views.

That won’t be a problem for Rivkees’ successor. On Tuesday, Gov. Ron DeSantis replaced Rivkees with a new surgeon general, Dr. Joseph Ladapo, a University of California, Los Angeles researcher. Beginning with a column in USA Today in March 2020, Ladapo has widely and frequently shared his opinions on the coronavirus.

In more than a dozen published columns in major newspapers, Ladapo has frequently deviated from the medical establishment consensus. In the USA Today piece at the start of the pandemic, for instance, Ladapo warned that American economic shutdowns would not stop the spread of the virus.

“Here is my prescription for local and state leaders: Keep shutdowns short, keep the economy going, keep schools in session, keep jobs intact, and focus single-mindedly on building the capacity we need to survive this into our health care system,” Ladapo wrote.

That piece published four days after DeSantis issued a series of restrictions via executive order curtailing activities at bars, restaurants and gyms.

Last summer, Ladapo was featured in a viral video where he and a group of other physicians appeared on the steps of the U.S. Supreme Court to promote various COVID-19 talking points, including the benefits of hydroxychloroquine as a treatment. Although the group named itself “America’s Frontline Doctors” and spoke about the mental health dangers associated with lockdowns, none of the physicians had practices “that would place them on the actual front lines of the COVID-19 pandemic,” reported MedPage Today, an online medical news service.

Ladapo researches the cost-effectiveness of diagnostic technology and ways to fight cardiovascular disease, according to his UCLA resume. Although Ladapo wrote two different columns saying that he has experience treating COVID-19 patients, MedPage Today said UCLA Health and Ladapo did not confirm that he had. The Miami Herald/Tampa Bay Times reached out to the governor’s office and UCLA Health, but did not immediately hear back.

Ladapo has continued writing as the pandemic — and the politics surrounding it — has evolved. In recent months, his words have closely aligned with the public pronouncements of Florida’s governor. Like DeSantis, Ladapo has expressed doubts about the efficacy of mask mandates — which he made clear with an emergency rule Wednesday affirming the state’s ban on mask mandates in schools. He’s called for an aggressive expansion of the availability of potential pharmaceutical treatments of the virus. And he’s criticized lockdowns as inhumane and ineffective.

Here are four of Ladapo’s most noteworthy COVID-19 takes: