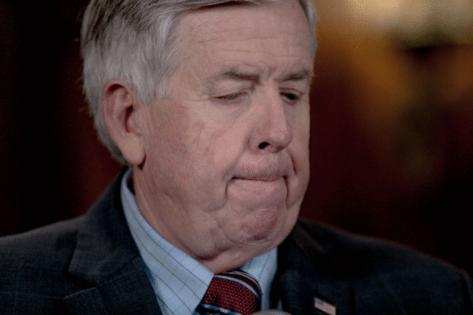 JEFFERSON CITY, Mo. — A report from Missouri lawmakers investigating how to block Planned Parenthood from receiving public funds recommends giving Gov. Mike Parson's administration the power to cancel its contracts based on unethical or illegal behavior in other states.

The Senate Interim Committee on Medicaid Accountability and Taxpayer Protection approved a report on Thursday that calls on the General Assembly to allow the Department of Social Services to block abortion providers from Medicaid based on misconduct by the provider in other states. Planned Parenthood is Missouri's sole abortion provider.

The recommendation comes after a showdown over Planned Parenthood's participation in Medicaid nearly led to the defunding of the entire Missouri Medicaid program in June.

Planned Parenthood is already prohibited from using Medicaid funds for abortion except when the mother's life is at risk, and the number of abortions performed at its St. Louis clinic has dropped precipitously in recent years. But hard-right lawmakers wanted to stop the organization from receiving public dollars for any services, clashing with Republican leaders and Democrats. They warned that action against the provider would trigger a confrontation with the federal government that could threaten the overall Medicaid program.

Senate leaders created the interim committee to "deliver the knockout punch" to Planned Parenthood, and the report all but guarantees lawmakers will make another attempt to kick the provider off Medicaid. Planned Parenthood has long been a target of Missouri Republicans, and conservatives are likely to intensify their efforts during an election year and ahead of a potentially seismic ruling next spring from the U.S. Supreme Court that could overturn Roe v. Wade, which guarantees the right to an abortion.

The committee's report says the General Assembly should change state law to authorize the Department of Social Services, DSS, to suspend, revoke or refuse to contract with any provider when it or its affiliates have "committed fraud, abuse, or unethical behavior and has been removed or prohibited from being a Medicaid provider in another state's Medicaid program" based on behavior that would be grounds for suspension or cancellation in Missouri.

While the proposal doesn't name Planned Parenthood, it is tailored to allow DSS to end the provider's Medicaid participation. Texas has already blocked the organization from receiving Medicaid dollars for non-abortion services.

Reproductive health advocates have raised alarms that denying Medicaid patients services at Planned Parenthood would cut off access to birth control, sexually transmitted disease treatments, cancer screenings and other health care for low-income women. The Missouri Family Health Council, which administers funding for a statewide network of family planning clinics, has said nearly half of its members' 38,000 mostly low-income patients go to a Planned Parenthood facility.

"If this is a backdoor attempt to defund Planned Parenthood, I do worry about the impact that would have on health care access," said Sen. Lauren Arthur, a Democrat. "It doesn't seem like there's a great solution for who would fill that gap."

The report also calls for the state's health department, which licenses and inspects abortion facilities, and the Department of Social Services, which administers Medicaid, to share investigations so the latter department can use the health inspections as grounds to disqualify a provider from Medicaid.

"We're asking them to be more vigilant and to review and intensify, if you will, what they're looking at," White, a Joplin Republican, said. "We're saying, we want you to have more criteria you're analyzing with ... We want it to be more diligent."

White asked the committee's members to sign the report by next week to allow the health and social services departments to begin issuing emergency rules.

The health department in 2020 lost a legal battle over its revocation of Planned Parenthood's St. Louis abortion clinic's license, which would have shut down the last remaining abortion facility in the state. And the Missouri Supreme Court last year struck down previous attempts by lawmakers to cut off Medicaid payments to the provider's 11 family planning clinics across the state through the state budget bills.

As of July 2021, all of the state's Planned Parenthood clinics had submitted about $680,000 worth of claims to Missouri's Medicaid program for services provided since 2019, according to figures DSS provided to the committee this year. That included just $753.00 for pharmacy services at the St. Louis clinic that performs abortions and no dollars for clinic services at that facility.

BALTIMORE — Mentally ill inmates at Maryland’s prisons are being held in solitary confinement, exacerbating their illnesses and violating their constitutional rights against being submitted to cruel and unusual ...Read More