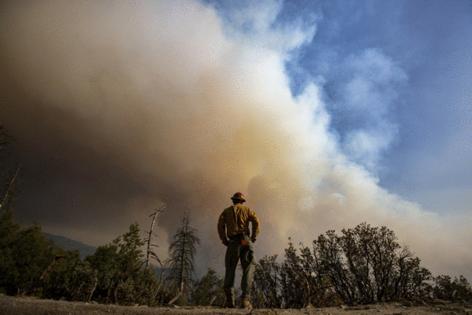 Standing before of a foil-wrapped, fire-proofed monument in Sequoia National Park amid a haze of wildfire smoke, Gov. Gavin Newsom on Thursday signed a $15 billion climate package for California, the largest such investment in state history.

As ash from the nearby KNP Complex fire rained from an opaque sky, Newsom outlined the details of the package, which included investments in drought response, forest management and climate risk mitigation.

California in recent months has been hit with record-breaking heat, devastating drought and a wildfire season that has seen more than 2.35 million acres burned across the state — a disastrous convergence of events that has been fueled by the burning of fossil fuels and threatens to become endemic to the region.

“We feel a deep sense of responsibility here in the state of California because of the smash-mouth realities of climate change,” Newsom said. “Not just the issues of the acuity and frequency and duration of these wildfires, but also what’s happening with this mega-drought over the enter West Coast of the United States.”

The announcement arrived in tandem with Climate Week and the run-up to the United Nations Climate Change conference in Glasgow, Scotland, this fall.

The aggregate items stem from the state’s larger $262.6-billion budget, which also encompasses COVID-19 pandemic relief and a sweeping effort to address homelessness, among other top priorities.

But the effects of climate change on Thursday seemed most acute as Newsom signed the legislation under smoke-filled skies. The KNP Complex and the nearby Windy fires have for days threatened California’s towering sequoia trees, which for many years were believed to be nearly impervious to fire.

Last week, officials were seen wrapping the General Sherman tree — known as the largest tree in the world by volume — in fire-resistant foil; a wrenching image in a fire-addled state.

“Here we are with these sentinels to our history,” Newsom said. “You’ve got trees that quite literally date back to over 3,300 years ago. You can’t rebuild a giant sequoia ... and that’s why we’re here with a deep sense of urgency.”