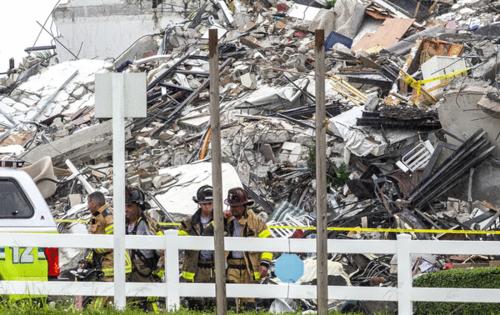 MIAMI — When the Surfside condo tumbled down in June, rescue workers painstakingly searched through the mountain of debris to recover nearly 100 victims and lots of personal property.

Among the buried personal items at the collapse site of the 12-story Champlain Towers South condo building were cars in the underground garage, as well as furniture, clothes, jewelry and photos of families and friends.

Miami-Dade County rescue workers also recovered cash — about $750,000 in total — some still neatly tucked into purses and wallets but most randomly scattered throughout the sprawling rubble.

“I guess that’s a little surprising — the amount,” Miami-Dade Circuit Judge Michael Hanzman said Thursday during a regular hearing on a class-action lawsuit and other legal matters swirling around the partial collapse of the Collins Avenue condo building.

Fortunately, though the mostly loose cash was badly damaged, there is hope that it can be restored and its value redeemed by the U.S. Department of Treasury, Goldberg told the judge.

Goldberg said the Treasury Department has agreed to clean up the cash and issue a check for its total value to the receiver so that he can return the money to the owners or a general fund for victims. He said some of the cash found in the purses and wallets can probably be linked to their owners, but the vast majority of the money cannot be tied to anyone — so it will end up going into the general fund.

Hanzman called his plan a “solid suggestion,” then added: “I will give everybody the right to be heard.”

How that process will unfold remains to be seen. More than likely, the receiver and the judge will create a system allowing for victims who lost some cash to file a claim.

In addition to the potential cash windfall, Goldberg told the judge that 17 safes were found in the rubble and must be examined to determine their owners. He said he is working with Miami-Dade officials and police, who have had control over the 8777 Collins Ave. condo site since the June 24 collapse of part of the building. For safety reasons, the standing portion of the tower was later demolished.