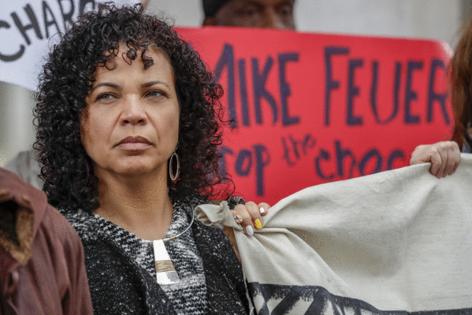 Melina Abdullah, a leader of Black Lives Matter Los Angeles who filed a lawsuit this week alleging the Los Angeles Police Department mishandled a "swatting" incident at her home last summer, was targeted with another false emergency call Thursday, according to LAPD officials.

In part because of existing concerns about false calls to the home, the department dispatched a unit along with a supervisor to Abdullah's home to check on her, Spell said.

Spell said officers knocked on Abdullah's door, but there was no answer, so then went to a neighbor's home to see if the neighbor could assist in contacting Abdullah — which worked, Spell said.

The department is now launching an investigation "into the origins of the call, understanding that this has been a location of a prior swatting incident," Spell said.

Audio of the initial call to police was not immediately available Thursday.

Abdullah, a co-founder of BLM-L.A. and a prominent leader of protests against police brutality in the city, said it was "very suspicious" that such a call would come the day after she announced her lawsuit over the previous incident.

"The timing is not coincidental," she said.

Abdullah questioned whether police had knocked on her door, and why there wasn't an ambulance sent instead of police officers if the call was for an alleged overdose.