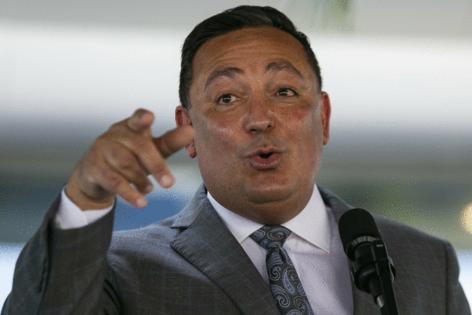 MIAMI — Despite the controversies surrounding him and a lashing from Miami commissioners, someone appears to be a very big fan of Miami Police Chief Art Acevedo.

So much so, that a person using the same computer address somewhere in Kansas likely voted for the chief more than 500 times in a police union poll that could help to determine his fate in the city.

The discrepancy threatens to further muddle and delay the results of an already quite unscientific poll commissioned by the president of the city’s Fraternal Order of Police — an elected officer who has been anything but shy over a series of beefs he’s had over the chief’s actions in the past few months.

“Once we clear up some discrepancies, we’ll release the numbers,” said Miami FOP President Tommy Reyes.

Miami’s 1,300 sworn officers were asked to vote on whether they’d lost confidence in the chief and if he should retain his job. The vote began Tuesday morning and was to end at midnight Wednesday. Polling was done over the internet and the questions were sent to all union members, including hundreds of retirees who are on Reyes’ email list.

The union president said he asked the retirees not to vote, though it would be hard to tell if they did or not because the votes are anonymous.

The vote is being taken just a few days before commissioners scheduled an emergency meeting to discuss actions taken by Acevedo and the department’s future. Results of the poll were expected to be used as fodder for commissioners who were furious at the chief over a statement made in which he said his department was run by the “Cuban Mafia.”

Acevedo later apologized, saying he was unaware it was a term coined by Fidel Castro that referred to Miami exiles as criminals for opposing his dictatorship.

Reyes’ beef with the chief goes back a few months to when Acevedo suggested that his officers need to get vaccinated or find another job. He also took umbrage with some slight damage that appeared on the chief’s vehicle and it not being reported after the chief made a big deal of firing a high-ranking married couple over a similar incident.

As for the poll, Reyes said he hoped it would be completed late Thursday or Friday. He said he plans on transferring the votes to a spreadsheet and eliminating all but one of the extra votes, before tallying it and making it public.

“There were also a handful of votes from the same address against the chief, but only maybe five,” said Reyes. “I’m going to clear it all up.”