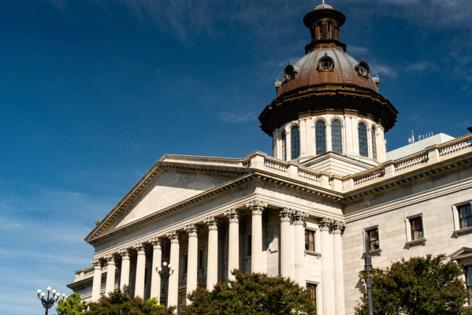 COLUMBIA, S.C. — The South Carolina Supreme Court ruled Wednesday a section of the Heritage Act, a controversial law protecting monuments and statues, that requires a supermajority vote to change by the Legislature is unconstitutional.

In a unanimous opinion, the justices wrote that the lawmakers who initially passed the Heritage Act in 2000 did not have the authority to bind future legislatures by requiring a supermajority, or two-thirds, vote.

That means, going forward, the Legislature will only need a simple majority of lawmakers to vote in favor to alter, change or remove a statue or monument.

“While I am disappointed that the Court chose to overturn the crucial two-thirds requirement contained in the original law, the opinion makes clear that the General Assembly is the sole authority,” House Speaker Jay Lucas, a Darlington Republican, said in a statement. “I reiterate what I have consistently said since 2015: The South Carolina House of Representatives will not engage in or debate the specifics of public monuments, memorials, state buildings, road names or any other historical markers during my time as Speaker.

“The protections over all of our state’s monuments and statues were ruled constitutional and they will remain in place.”

The court upheld the part of the law that allows the Legislature to make decisions about the monuments and statues, despite the plaintiffs’ arguments that the decision should lie with local authorities. That section of the law makes it impossible for local governments to move, remove or alter memorials, statues and monuments honoring the Confederacy and other wars as well as other public structures and places named for historical figures, including African Americans and Native Americans.

The Supreme Court heard arguments about the constitutionality of the Heritage Act in late-May at the urging of Republican Attorney General Alan Wilson. The lawsuit in question was filed by three Black South Carolinians, including Jennifer Pinckney, the widow of the late state Sen. Clementa Pinckney, who was murdered with eight others by a white supremacist during a Bible study at a Charleston church in 2015. Pinckney was joined by Columbia City Councilman Howard Duvall and former state lawmaker Kay Patterson.

During the hourlong hearing, the five justices took turns picking the law apart, questioning why only certain groups and wars were protected.

Controversy over the law predated the state Supreme Court hearing.

In a nonbinding opinion last year, Wilson’s office wrote that the two-thirds vote threshold is likely unconstitutional but said the Legislature is allowed to make changes to historic memorials, monuments and statues.

(The State's Maayan Schechter contributed to this story.)