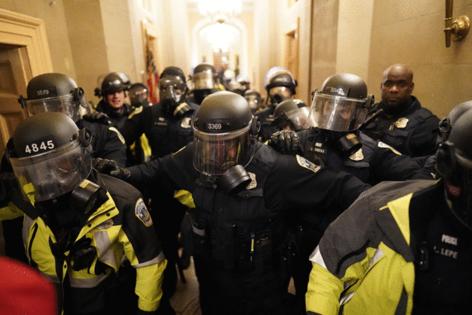 CHICAGO — Two more Illinois residents have been charged with breaching the U.S. Capitol Jan. 6 after FBI agents identified them on social media and security images, according to court records made public Tuesday.

Dawn Frankowski, of Naperville, and David Wiersma, of Posen, were charged in a criminal complaint filed in U.S. District Court in Washington, D.C., with entering and remaining in a restricted building and disorderly conduct on U.S. Capitol grounds, according to court records.

FBI agents were first tipped off about Wiersma by an ex-coworker of his who said she worked with him at PCI Energy Center in Lake Bluff for more than 10 years, authorities said. She told agents Wiersma posted on Facebook that he was at the rally and that he had entered the Capitol building on Jan. 6.

In a screenshot of Facebook posts from two accounts FBI agents tied to Wiersma and included in the complaint, a status says in part: “Spent about 30 minutes inside and got out before the swat team went in.”

In a third Facebook account tied to Wiersma, agents found a Facebook live video they believe he posted of himself and others in the Capitol building, the document states.

Wiersma was identified in several photos both at the rally and inside the Capitol. In some of those photos, agents identified Frankowski standing near or next to Wiersma, according to the complaint.

Frankowski told agents she entered the Capitol building with Wiserma and they were inside for about 30 minutes, according to the complaint. She said she entered two rooms inside the building, the document said.

Fifteen people from Illinois have been charged in the Capitol breach, including Chicago police officer Karol Chwiesiuk, who was accused of breaching the building with the mob and entering the office of U.S. Sen. Jeff Merkley, D-Ore.

Earlier this month Marcos Gleffe, 38, was charged with breaching the U.S. Capitol and waving pro-Trump flags.

In late August, former suburban tech CEO Bradley Rukstales became the first Illinoisan to be convicted over his part in the riot, pleading guilty to being part of a mob that confronted police in the Capitol’s crypt, a circular room beneath the rotunda.

Other Illiniois residents charged in the Capitol breach include Shane Jason Woods, 43, of Auburn, who was accused of assaulting members of the media and tripping a police officer who was running from bear spray during the Capitol unrest.

Christian Kulas, 24, of Kenilworth, was arrested on charges alleging he posted video of himself on Instagram storming the Capitol building during the siege while wearing a designer coat and pro-Trump hat.