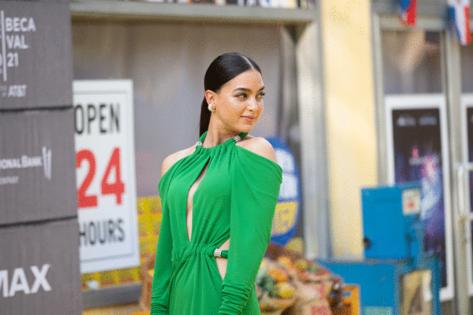 The “In the Heights” actress explores the depths of addiction in the new drama, starring as a young mother whose daily struggle with drugs jeopardizes her health and custody of her daughter.

Barrera’s character, Chama, is based on the real-life experiences of seven mothers who battled addiction and came together to share their stories through the film. The film made its world premiere last week at the New York Latino Film Festival.

From the moment Barrera read the script, she knew she wanted to make the movie.

“There was a deep connection with Chama that I couldn’t explain,” Barrera told the Daily News. “I was actually really baffled at how similar we were in the way that we thought, and how different our life circumstances are.

“I think that’s the goal of the movie. It’s humanizing this disease that is addiction, and showing how anyone can be affected by it. It really is just a matter of where you happen to be born and into what family and in what place.”

The movie introduces Chama as a loving mother in New Mexico whose life is consumed by her addiction. It follows her journey toward recovery, despite her family giving up on her and treatment centers turning her away.

“It all happens in Chama’s head,” Barrera explained. “You’re literally in her thoughts, and you’re hearing her every reasoning for every move that she makes. I think that’s fascinating to be inside the brain of an addict and see how they think, and how certain normal situations are really overwhelming for them and how they really go about their day.”

Barrera, 31, worked closely with the women who inspired the story, visiting their homes and meeting their families as they shared their experiences.

They also advised Barrera on set as she depicted getting high and suffering withdrawals.

“They told me, ‘Literally, your body starts moving and convulsing and you cannot control it. You would start sweating, and the pain, you would feel like you’re burning inside.’ All these things that they all went through,” Barrera said. “It was like having the best resource there so that I can give the best and most honest performance.”

The film, which Barrera shot in 2018, was made by Bold Futures, an organization supporting women and people of color in New Mexico.

“The whole point of Bold Futures commissioning this movie is to get the message out there that these women are not disposable,” Barrera said. “That they’re human beings, it’s a day-to-day battle, and they’re warriors. It’s a disease that a lot of people don’t acknowledge as one. A lot of people think, ‘Oh, if they wanted to leave it, they just would.’ They don’t know that’s actually really hard.”

The film marks the latest leading role for Barrera, who also portrayed Vanessa in the movie musical “In the Heights” and Lyn on the Starz drama series “Vida.”

The Mexican-born actress is excited for audiences to experience “All the World is Sleeping.”

“I’m very grateful that we get to premiere at a festival where it’s all our people,” Barrera said, “and that we finally get to share it with the world.”