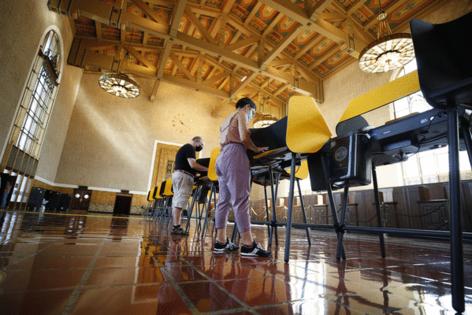 A voter, driven by disinformation that Republican politicians had pushed for weeks, berated Adona over the state’s lack of a photo ID law, saying election officials exposed the voting system to fraud.

Adona explained that election officials follow state law and verify signatures on mail-in ballots. After a tense back-and-forth, the voter called her a Nazi. Election officials across the country say such attacks have become commonplace.

“It’s escalated to an unhealthy and dangerous level,” Adona said in an interview. “We are trying to talk over others who have a further reach, more money, more power and basically are more interested in winning elections than American democracy, even though they know what they’re saying is not true.”

The lies about election fraud, which range from false claims about the winner of the 2020 presidential race to accusations about this month’s California recall process, have state and local election officials worried about the future. As gubernatorial contests in New Jersey and Virginia approach this fall, and next year’s national midterms near, election officials are struggling to combat disinformation and assure voters their ballots are secure.

Many of these nonpartisan bureaucrats are asking themselves how they should counter false narratives.

The onus for quieting wrong accusations should be on the political campaigns and parties that have perpetuated them, said Tammy Patrick, senior adviser for the D.C.-based nonprofit Democracy Fund, which advocates for election officials. But the responsibility for debunking those claims instead has fallen on election officials.

In Virginia, where early voting started last week, state Elections Director Chris Piper said he and other election officials have a responsibility to fight the attacks on the voting system by being transparent. Election officials can no longer sink into the background, content with their job performance, without explaining to the public how they work, he said.

“We’ve started an all-out push,” he said. “We have to be really aggressive about getting that information out there. It’s just too critical to not be talking about the incredible amount of work that goes into putting on an election.”