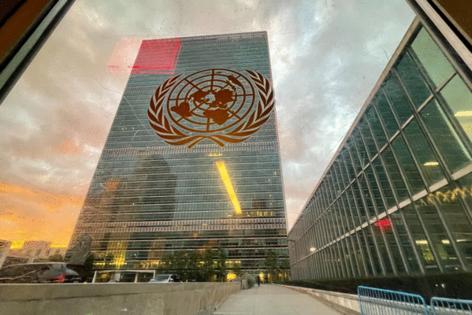 The Taliban nominated Mohammad Suhail Shaheen to be Afghanistan’s ambassador to the United Nations and requested that their foreign minister be allowed to address the U.N. General Assembly taking place this week in New York.

But the request may run up against some diplomatic hurdles.

In a letter to U.N. Secretary-General Antonio Guterres, the Taliban said former President Mohammad Ashraf Ghani was ousted as of Aug. 15 and that countries across the world “no longer recognize him” as the war-torn nation’s leader. Farhan Haq, a U.N. spokesman, confirmed the letter.

With Ghani’s U.N. ambassador, Ghulam Isaczai, currently in place at the global organization, the Taliban said they want acting Foreign Minister Ameer Khan Muttaqi to be allowed to address the General Assembly.

Yet some officials have said any move by the U.N.’s Credentials Committee to approve a new Afghanistan ambassador wouldn’t take place quickly enough to allow a Taliban representative to address the gathering, allowing Isaczai to still deliver a speech next Monday despite being part of a the former government.

While few nations have officially recognized the Taliban’s takeover of Afghanistan, the militant group and U.N. officials are working together to provide food and other aid to avert a growing humanitarian crisis in Afghanistan. Separately, the U.S. says it is still communicating with the Taliban in efforts to evacuate dozens of citizens still in the country who seek to leave, as well as Afghans who had helped American and NATO forces during 20 years of war.

But U.S. and allied officials say those efforts are a long way from granting formal recognition of the Taliban, citing issues including the militant group’s treatment of women and its ties to terrorist groups.