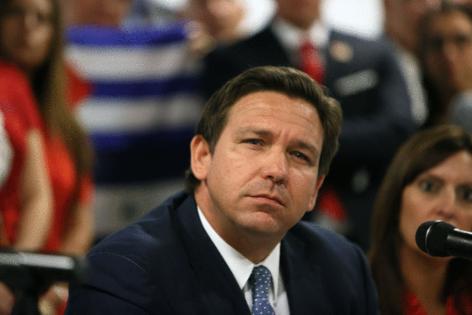 The judge’s ruling struck down a key portion of the 2019 law that prohibits local and state officials from adopting “sanctuary” policies for undocumented migrants, a main focus for Gov. Ron DeSantis, who vowed to ban “sanctuary cities” in Florida when running for governor in 2018 even though there were none in the state.

The judge also blocked the state from enforcing a provision in the law that requires law enforcement officers and agencies to “use best efforts to support the enforcement of federal immigration law” when they are acting within their official duties.

But the court allowed other provisions to stand, including one that required state and local law enforcement agencies to comply with immigration detainers — federal requests to hold undocumented immigrants past their release dates so that immigration agents can pick them up.

However, the judge blocked a provision that said local and state agencies could transport detainees who are subject to an immigration detainer to federal custody outside of their jurisdiction because it is “preempted by federal immigration law and is therefore unconstitutional.”

The ruling was in response to a lawsuit filed by the city of South Miami and other organizations, including the Florida Immigration Coalition, against DeSantis in an effort to strike down the law.

“The verdict validates what we said three years ago, Governor DeSantis pushed for a law that is not just racist, but unconstitutional,” said Antonio Tovar, a board member of both the Florida Immigrant Coalition and the Farmworkers Association of Florida, another group that joined the case.

In her ruling issued Tuesday, U.S. District Judge Beth Bloom weighed evidence and testimony that focused on how the law, also known as SB 168, was drafted and advanced by the Florida Legislature.

For instance, the court concluded Sen. Joe Gruters, the sponsor of the bill, who doubles as the chairman of the Republican Party of Florida, and his Senate staff ignored the “racial animus and discriminatory intent” espoused by third-party groups that helped draft and promote the bill during the legislative session.

Bloom said the ban on so-called sanctuary policies “was enacted based on biased and unreliable data generated by anti-immigrant hate groups FAIR [Federation For American Immigration Reform] and CIS [Center for Immigration Studies], despite the chilling effect and disparate impact that this provision would have on immigrant communities.”

“Moreover, the Best Practices Provision anticipated and intended to grant enforcement officers expansive discretion on when and how to use their ‘best efforts,’ despite the knowledge that such proactive policing measures were likely to increase the amount of racial profiling that occurs during law enforcement interactions,” Bloom wrote.

Bloom concluded that “these discriminatory effects were both foreseeable and known to the Legislature at the time of SB 168’s enactment.”

In response to the ruling, Gruters said the “judge was misled as that opinion is not based on facts.”

“This bill was always about public safety and ensuring that illegal aliens are not treated better than Americans when it comes to the judicial system,” he said in a statement to the Herald/Times. “I look forward to this ruling being overturned.”

How the law impacted people

In the case, plaintiffs’ witnesses offered examples of how the law has had a “chilling effect” in immigrant communities. Some testified that more people were victims of domestic violence but refused to involve law enforcement out of fear of deportation. Others said fewer undocumented immigrants are willing to access their healthcare clinics or social services out of fear of being detained.

Marleine Bastien, the executive director of Family Action Network Movement, a nonprofit located in Little Haiti in Miami-Dade County, testified the law led to more calls and inquiries of concern about the law among undocumented immigrants and U.S. citizens.

At one point, she said she participated at a press conference with Miami-Dade Schools Superintendent Alberto Carvalho to “encourage parents to send their kids to school without fear of deportation or other immigration consequences.”

Dr. Allan Lichtman, a professor of history at American University with expertise in statistical and political analysis as well as discriminatory legislative intent and impact, also testified on behalf of plaintiffs.

Lichtman testified that state lawmakers, insisting that the bill was about public safety, contradicted crime rate data from the Florida Department of Law Enforcement and federal data on ICE arrests.

Lichtman concluded that the bill sponsors’ claim that the bill would reduce crime rate and improve public safety “appear to be unsupported by the statistical data on falling crime rates in Florida, despite the simultaneous rise in undocumented immigration.”

Anna DeCerchio, the governor’s deputy chief of staff, testified in court that the office has not received any complaints and has not investigated or initiated any proceedings to enforce compliance or to remove anyone from office for violating the sanctuary cities law.

The governor’s office also has not taken steps to investigate violations of the law’s anti-discrimination clause to ensure that agencies are complying, she said.

“Nor have any resources been allocated with which to do so because of the lack of complaints received,” DeCerchio testified.

DeSantis’ office did not immediately comment on the ruling. His spokeswoman, Taryn Fenske, said the governor’s legal team is reviewing the 110-page court decision.