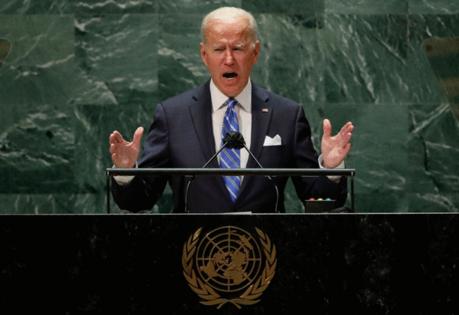 NEW YORK — President Joe Biden tried to extend his global honeymoon with the international community during his first speech to the United Nations on Tuesday, promising “relentless diplomacy” now that the United States has “turned the page” on the war in Afghanistan.

In a speech that asserted the world was at the beginning of a “decisive decade,” Biden urged countries to cooperate with one another on borderless challenges like climate change and the COVID-19 pandemic.

“Our security, our prosperity and our very freedoms are interconnected, in my view, as never before,” he said. “And so, I believe we must work together as never before.”

However, the specter of a world divided between the U.S. and China hung over the U.N. General Assembly, where Secretary-General Antonio Guterres opened the session by warning that the two countries’ lack of cooperation was “a recipe for trouble.”

Biden said he would work to ensure “we do not tip from responsible competition to conflict.”

“We are not seeking a new cold war, or a world divided into rigid blocs,” he said. “The United States is ready to work with any nation that steps up and pursues peaceful resolution to shared challenges, even if we have intense disagreements in other areas.”

Diplomats have struggled to set the stage for successful negotiations over climate policies ahead of a summit later this year in Scotland, and Biden said countries must “bring their highest possible ambitions to the table.”

Chinese President Xi Jinping, who delivered a prerecorded video address on Tuesday, took a significant step in that direction by announcing that Beijing would stop supporting the construction of new coal power plants around the world. Similar commitments had already been made by South Korea and Japan, and China was under pressure to follow suit.

For his part, Biden announced that he would try to double the money the U.S. has pledged to help developing countries adapt to climate change. It wasn’t immediately clear, however, if Congress would go along with the plan; environmental proposals have repeatedly languished on Capitol Hill.

Biden’s speech represented a change from the hard-edged “America first” approach championed by former President Donald Trump, who spent four years sowing frustration around the globe. Biden repeatedly emphasized his desire to reengage with the world through international institutions like the U.N., which had been scorned by Trump.