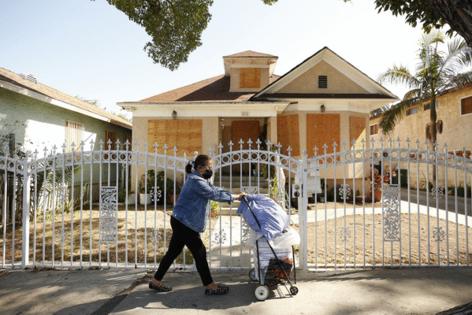 LOS ANGELES — Los Angeles city officials on Tuesday acknowledged a long road ahead before residents and business owners will be made whole and returned home following the summer explosion of a South L.A. block by the Los Angeles Police Department’s bomb squad.

Nearly three months after the June 30 explosion, which occurred after bomb squad members badly miscalculated the firepower of seized fireworks, only 26 of about 200 related claims submitted to the city have been paid out, officials said during a Tuesday meeting of the Police Commission.

The explosion sent out a blast wave that made some homes uninhabitable, badly damaged and blew out the windows of others, and caused other damage for several blocks. Dozens of businesses, residential properties and vehicles were damaged, officials have said.

In addition to the 26 paid claims, the city was trying to finalize payment on an additional 25 claims, and has requested additional information from 128 other claimants, officials said. Officials did not provide a monetary value of those claims. Individuals affected by the blast have six months to file claim, so more claims could still come in, officials said.

Nearly 90 people remained displaced from their homes, with the city continuing to pay for 29 rooms at a downtown hotel to house them, officials said.

Hundreds of thousands of dollars have been set aside to pay for those rooms at the Level Hotel, according to contracts reviewed by the Los Angeles Times, but city officials have declined to provide total costs or invoices to date, saying payment has not been finalized.

The latest figures were presented by members of a multiagency task force established to coordinate various city efforts to look out for displaced and other affected residents and business owners as the city processes claims, makes repairs to homes and provides other services that community members have requested — such as therapy for kids children dealing with the blast’s aftermath.

The update followed a report by the U.S. Bureau of Alcohol, Tobacco, Firearms and Explosives, made public by the LAPD last month, that found that the explosion occurred after members of the LAPD bomb squad badly miscalculated the fire power of a cache of illegal fireworks that were seized from a home in the 700 block of East 27th Street.

The bomb squad members didn’t weigh the explosives but eye-balled them before putting them into a “total containment” vehicle meant to contain the detonation of the fireworks and the resulting blast, the ATF found.

The vehicle was blown to pieces, its door shooting into the air before landing several blocks away.