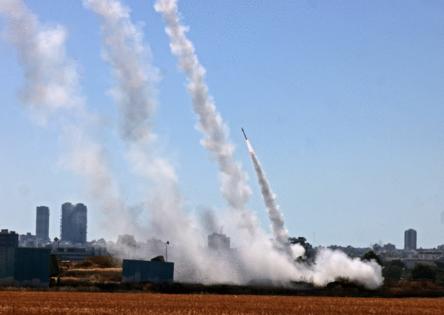 WASHINGTON — Democratic leaders agreed to strike aid for Israel's missile defense program that had been delaying House consideration of stopgap funding legislation Tuesday, after progressive Democrats who've opposed Israel's military operations in the Palestinian territories lodged objections to including the money in the must-pass spending bill.

The earlier version of stopgap funding legislation would have provided the Israeli government with $1 billion for its Iron Dome missile defense system "to counter short-range rocket threats," a response to attacks on Jerusalem by Palestinian groups in the Gaza Strip over a 12-day period in May.

Sources familiar with the discussions later said the Iron Dome funds, included in response to a June request from the Israeli government that the Biden administration endorsed, would have to come out of the continuing resolution.

"A group of progressives communicated to leadership that they wouldn’t be able to support the CR if the $1 billion in additional funding for the Iron Dome wasn’t taken out," said a House Democratic aide who wasn't authorized to speak publicly.

House Appropriations Chair Rosa DeLauro, D-Conn., later released a revised stopgap bill with the Iron Dome funding dropped, plus a few other technical changes. An Appropriations Committee spokesperson said the money would instead be added to the final fiscal 2022 Defense spending bill, once that's finalized later this year.

Attempts to reach several progressive lawmakers weren't immediately successful Tuesday. But problems become evident earlier in the day when House Rules Chairman Jim McGovern, D-Mass., recessed his panel's meeting to consider parameters for floor debate due to what he dubbed a "glitch" in the stopgap bill, which he didn't elaborate on. Sources familiar with the discussions confirmed Iron Dome funds were in fact the glitch.

The temporary funding measure would keep federal agencies' lights on through Dec. 3, suspend the statutory debt ceiling until after the midterm elections, and provide nearly $35 billion to address natural disasters and help relocate Afghans who fled their country after the Taliban takeover.

The continuing resolution would provide a range of program extensions and "anomalies" for certain agencies to spend additional funds. Examples include a Medicaid boost for the territories, more money for former President Donald Trump's office and staff and a renewal of lapsing authority to write national flood insurance program claims.

An extension of expiring surface transportation programs was left out due to a push from House Democratic moderates to vote on a bipartisan five-year package that passed the Senate last month.

The most contentious add-on is likely to be the debt ceiling suspension, which Republicans in both chambers have pledged to oppose. The House is expected to vote on the measure later Tuesday, but with about nine days remaining until the end of the fiscal year, the path to averting a partial government shutdown starting Oct. 1 wasn't yet clear.