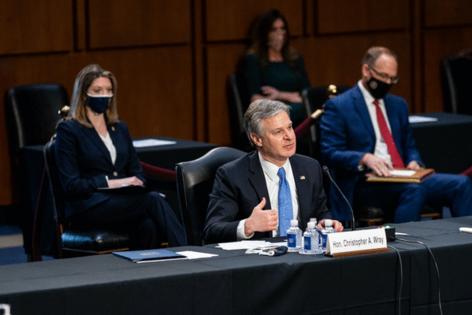 National Counterterrorism Center Director Christine Abizaid testified before Congress that the Taliban's reemergence and takeover of Afghanistan could set the stage for terrorist groups to rebuild there. The Taliban sheltered al-Qaida as the group planned the Sept. 11 attacks.

"Afghanistan is a very dynamic environment right now," Abizaid said during a hearing before the Senate Committee on Homeland Security and Governmental Affairs.

Abizaid testified that the likelihood of major attacks on American soil had diminished in the two decades since the Sept. 11 attacks. While the danger is "less acute" than in 2001, she said, preventing attacks remains a challenge because the threat is "more ideologically diffuse and geographically diverse."

Abizaid was joined during the hearing by FBI Director Christopher A. Wray and Homeland Security Secretary Alejandro N. Mayorkas who agreed that terrorist groups operating in Afghanistan posed mostly a regional threat.

However, Wray testified that the U.S. pullout from Afghanistan and the Taliban's rapid takeover of the country could inspire extremists living in the U.S. and other Western countries to engage in violence.

"We are concerned that, with developments in Afghanistan — among other things — that there will be more inspiration" to act, Wray said.

Wray added that his agency has also been doggedly tracking the threat posed by domestic terrorist groups, particularly since a pro-Trump mob swarmed the Capitol on Jan. 6. He testified that the FBI has about 2,700 active domestic terrorism investigations, up from about 1,000 in spring 2020. He said he has doubled the number of personnel devoted to investigating such cases.

Much of the hearing focused on the threat posed to the U.S. by terrorist groups operating in Afghanistan. Following the Sept. 11 attacks, the U.S. and its allies drove the Taliban from power. Two decades later, President Joe Biden announced in April that the U.S. would leave Afghanistan.

The final days of the pullout last month were deadly and chaotic as the Taliban took over the country. Thirteen U.S. service members, posted on the periphery of the airport during the evacuation, died in a suicide bombing on Aug. 26. U.S. officials blamed the attack on ISIS in Khorasan, or ISIS-K, an Afghan-based offshoot of Islamic State.

With no presence in Afghanistan following the withdrawal, the U.S. will face serious challenges in trying to ensure the country does not again become a breeding ground for terrorism, security experts have said.

U.S. Sen. Rob Portman, R-Ohio, said he was particularly concerned that the Taliban has extensive ties with terrorist groups. "The new Taliban looks very much like the old Taliban," Portman said.

Portman noted that Sirajuddin Haqqani — the country's new interior minister — is the leader of the Haqqani network, which the U.S. designated as a terrorist group in 2012.

Haqqani is wanted for questioning by the FBI for his potential connection to a 2008 attack on a Kabul hotel where six people, including one American, were killed. The State Department is offering a reward of up to $10 million for information that directly leads to Haqqani's arrest.

"Obviously we are concerned," Wray said, that Haqqani has a leadership position in Afghanistan's government.

Portman and other lawmakers also raised concerns about how well Afghan refugees and evacuees are being vetted by U.S. officials. The U.S. evacuated 124,000 people from Kabul's airport in the days after the Taliban took over the city.

Mayorkas said the Department of Homeland Security is carefully screening Afghans. He said more than 60,000 people have been brought to the U.S. from Afghanistan. About 7% are U.S. citizens, 6% are lawful permanent residents and 3% are Afghans who have received special immigrant visas for their work on behalf of the U.S. government.

The rest are vulnerable individuals whose applications are being carefully reviewed and processed, he testified.

"We have a screening and vetting architecture," Mayorkas said. "We have greater cooperation amongst the federal agencies in the counterterrorism, intelligence and law enforcement communities. We remain ever vigilant in that regard."