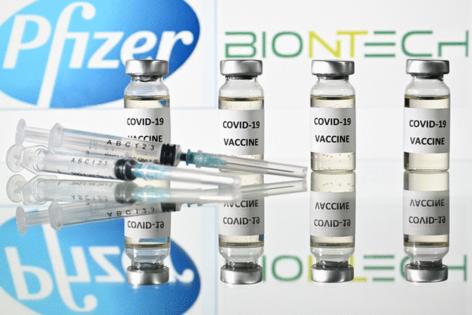 WASHINGTON — President Joe Biden plans to announce an order of 500 million doses of the Pfizer Inc.-BioNTech SE vaccine Wednesday, according to two people familiar with the matter, as the president looks to increase donations of shots abroad and ward off criticism about U.S. plans for boosters.

Negotiations between the administration and manufacturers are continuing but a deal is poised to be unveiled at a virtual vaccine summit, said the people, who asked not to be named ahead of the announcement.

The order would double the amount of the Pfizer-BioNTech shots that the U.S. has bought for export. An initial pledge of 500 million doses was made in June and deliveries began in August. About 200 million of those will ship by Dec. 31. Another 300 million are due by the end of June. It’s not clear when the new order of 500 million shots would ship or how much they would cost.

Biden has planned the summit to coincide with United Nations General Assembly meetings this week and has promoted his coming announcement.

“I’ll be announcing additional commitments as we seek to advance the fight against COVID-19 and hold ourselves accountable around specific targets on three key challenges: saving lives now, vaccinating the world and building back better,” Biden said in a speech on Tuesday.

He said that the U.S. has shipped more than 160 million doses of vaccine abroad. The U.S. is the top donor of vaccines, according to UNICEF data, although other countries have high export totals based on vaccine sales. U.S. donations have landed in 100 countries, Biden said.

On top of the 1 billion doses ordered specifically for donation, the U.S. has donated another 130 million. The U.S. has administered 386 million doses domestically so far, a figure that is poised to jump in the coming months as booster shot campaigns expand and with potential authorization of shots for children age 5 to 11.