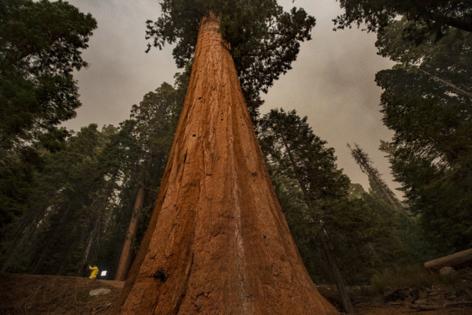 Two fires — the KNP Complex in Sequoia National Park and the Windy fire in Sequoia National Forest — were lapping at the base of the beloved behemoths, officials said. Crews over the weekend scrambled to protect the Giant Forest, home to the General Sherman tree, known as the largest tree on Earth.

The Giant Forest stood relatively unscathed Monday morning, but the fate of several other groves still hangs in the balance. Some flames from the Windy fire have already begun chewing the trunks of trees within Long Meadow Grove, home to 1,500-year-old sequoias along the Trail of 100 Giants.

The Windy fire on Monday had swelled to 25,191 acres and was only 4% contained, officials said. And in a sign of worsening conditions, the fire burned to the top of at least one towering tree in that grove Sunday night.

“It was running toward multiple trees and they were able to get it out, but it did get into the crown of one of the sequoias,” Windy fire incident spokeswoman Amanda Munsey said.

While some wildfire can be beneficial for sequoias — and, in fact, is necessary for their reproduction — crews were hoping that any fire within their groves would stay along the forest floor. Last year, the nearby Castle fire incinerated the crowns of several giant sequoias, decimating nearly 10% of the world’s population of the already endangered trees.

Images captured inside Long Meadow Grove on Sunday showed glowing embers swirling in the bark of some trees while downed logs and branches smoldered and smoked. Munsey said it was too soon to tell whether any trees had been killed.

Wildfire has also reached some other, more remote groves, including the Peyrone Grove and the Red Hill Grove, she added.

“We don’t know that those are destroyed,” she said, “but the fire has completely surrounded those two groves.”

Further north in Sequoia National Park, the 23,743-acre KNP Complex remains a significant threat with 0% containment, but firefighters have managed to defend many of the trees within the fire’s path.