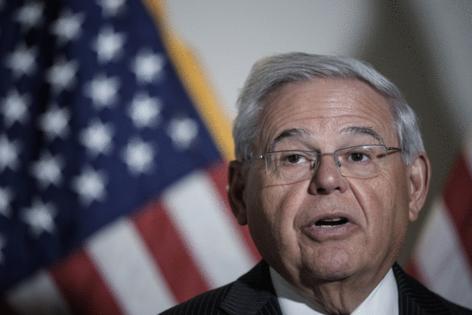 WASHINGTON — Democrats are preparing alternative options to present to the Senate parliamentarian to get immigration provisions into a sprawling $3.5 trillion budget reconciliation measure after she rebuffed their first attempt to include a path to legal status for millions of undocumented immigrants.

Sen. Bob Menendez, D-N.J., a key player in immigration discussions, told reporters Monday that Democrats “will be going back to the parliamentarian with other options in the coming days.”

“She gave her view on only one approach on including a pathway to citizenship in reconciliation,” Menendez said, just hours after Parliamentarian Elizabeth MacDonough shot down efforts to include a path to legal status for certain immigrants in the bill.

“I certainly intend to keep working until we get to a yes, and we’re not going to take no for an answer.”

Senate Majority Leader Charles E. Schumer also indicated those plans, saying in a statement Sunday night that Senate Democrats “have prepared alternate proposals and will be holding additional meetings with the Senate parliamentarian in the coming days.”

The alternative options are part of a back-and-forth likely to ensue with the parliamentarian, as Democrats work to include a pathway to citizenship for undocumented immigrants for the first time in decades before potentially losing their congressional majorities in the 2022 midterm elections.

In her decision, MacDonough said she found the proposed provisions, which would have covered millions of undocumented immigrants, including those brought to the U.S. as children, did not comply with Senate procedural rules governing the reconciliation process. Under the so-called “Byrd rule,” measures included in a reconciliation bill — which can pass with a simple majority — must directly have a budgetary impact.

“Changing the law to clear the way to (lawful permanent resident) status is tremendous and enduring policy change that dwarfs its budgetary impact,” she wrote.

One alternative being explored, according to Menendez, could be to move up the date on the immigration registry, an existing law currently set at 1972, which would allow immigrants who have resided in the U.S. since that date and who have demonstrated “good moral character” to become permanent residents.

Menendez said he would “personally prefer” this option, since it would involve an update, not a change, to the law, which could be more palatable to the nonpartisan parliamentarian.

Kerri Talbot, deputy director at The Immigration Hub, who previously served as Menendez’s chief counsel, could see MacDonough being open to that option for the same reason.

“There were some phrases in her decision about whether we were proposing new ideas, or whether these were already existing statuses or provisions,” she said.

However, updating the registry would exclude immigrants who arrived in the country after the newly updated year, including younger so-called Dreamers who came to the U.S. as children and immigrants from Haiti and Venezuela who fled more recent crises.

Menendez said another option would give undocumented immigrants a “recognized status” within the U.S. that would not put them on a path to citizenship. These types of interim protections could be done more easily through executive action, but would fall far short of what advocates have pushed for.

MacDonough’s decision did not tank all of the proposed immigration changes in the reconciliation text. While much of the advocacy community has focused on providing permanent relief for undocumented immigrants, including those at imminent risk of deportation, provisions to help work visa holders stuck in lengthy backlogs were not affected by the parliamentarian’s decision.

The U.S. limits the number of employment-based green cards handed down annually by country, forcing foreign professionals from populous countries like India to wait years or even decades for their turn in line.

In the House Judiciary Committee’s portion of the reconciliation text, Democrats proposed to “recapture” unused green cards from prior years to make more visas available for high-skilled visa holders.

The text also included provisions to allow some green card applicants to pay a hefty fee to be exempt from the per-country quotas entirely.

Provisions recapturing green cards were previously passed in a Republican-led reconciliation bill in 2005.

Talbot said plans to recapture green cards and help work visa holders in the backlog are still on the table for Democrats.

“I do not think that the parliamentarian’s ruling speaks to that, since that was not submitted as an option for her to consider at that time. But I do believe they’ll first pursue legalization ideas, and then I do believe that at some point they will also discuss recapture with her as well,” she said.

Greg Chen, government relations director for the American Immigration Lawyers Association, said these provisions, if successfully enacted, would be significant for large numbers of people stuck in the backlogs.

“We’re talking about years of wait by family members and potential foreign workers that have been unable to fill jobs and to reunite with their families,” he said.

The absence of any immigration measure could make it harder to pass the package in the House, adding pressure on Democrats, who can afford to lose only three of their own party’s members in the House amid united GOP opposition.

Rep. Jesús “Chuy” García, D-Ill., said in July he would not vote for a reconciliation measure without a pathway to citizenship for undocumented immigrants.

He’s now one of several more progressive lawmakers calling on Senate Democrats to consider overruling MacDonough, which would require the support of all 50 Senate Democrats and Vice President Kamala Harris.

In a statement late Sunday, Garcia urged the Senate “to have the courage to overrule this decision.”

Rep. Ilhan Omar, D-Minn., made a similar call, writing on Twitter that the parliamentarian’s decision “is only a recommendation” and that Schumer and the White House “can and should ignore it.”

In addition, immigrant advocates continue to ramp up the pressure, warning of political consequences for Democrats if they fail to pass legislation creating a path to citizenship this year.

“Nobody gets to hide behind (the parliamentarian) this year. There are no brownie points for trying. There are no participation trophies,” Lorella Praeli, co-president of Community Change Action, told reporters Monday.

Some advocates stressed that MacDonough is an unelected official, and that these types of procedural maneuvers may not resonate with voters as much as a positive or negative outcome on legalization would.

“She was not elected. Voters elected Democrats and voters elected President Biden,” said Marielena Hincapié, the executive director of the National Immigration Law Center who served as co-chair of the Biden-Sanders Unity Task Force on Immigration. “Most voters don’t even know what a parliamentarian is.”

Chen, of AILA, said Democratic leadership must evaluate whether they have enough colleagues who believe the parliamentarian’s decision was mistaken or lacked reasoning.

“The parliamentarian’s ruling does leave itself somewhat vulnerable to that kind of criticism, because there are different points in the ruling where the parliamentarian seems to be making judgments about immigration policy rather than making a determination about budgetary impact, which is the realm of her jurisdiction,” he said.

However, Democratic leadership and the Biden administration may hesitate to back such a move. Similar calls to overrule MacDonough were made earlier this year when she rejected Democratic efforts to include a minimum wage increase via budget reconciliation.

“I don’t believe that’s realistic. The votes needed on the floor are not there,” he said. “I hope I’m wrong. I just don’t think at this moment that’s a realistic approach.”

(Chris Cioffi contributed to this story.)